It’s been a cold Sunday across the region with temperatures more than 10 degrees below where you would expect them as we start meteorological winter. Interestingly, there’s warmer air moving northward from the higher levels of the atmosphere, and this is going to produce a period of snow, sleet, and freezing rain overnight tonight.

As the winds turn and come off the water, temperatures at Logan Airport should bump above freezing, quickly meaning I’m not expecting a lot of snow for the official Boston observation. However, as you move inland, snow amounts will increase, getting more than 6 inches north and west of Interstate 495. Most of the snow will have fallen by 2 a.m. Monday, after which we will see some rain along the coast, sleet in the middle and still some residual snow in interior areas of Massachusetts.

Storm arrives later this afternoon. Remember, it’s in two distinct parts. Tonight’s snowfall is heaviest through about 2 a.m. Then we have a break before Monday afternoon/evening start of next round which lasts into Tuesday morning. Still uncertainty with how much snow then. pic.twitter.com/kxFp3JSC3z

Snowfall rates during the first part of Sunday evening could reach one inch per hour, especially north of the Mass Pike and west of Interstate 495. I don’t recommend traveling unless you need to during this initial round of snow. There will not be any coastal issues or high winds overnight tonight. For those of you who work, and for local public works departments or school departments, there should be adequate time for clean up before sunrise on Monday.

I don’t expect much in the way of accumulation Monday. Temperatures will be above freezing over eastern Massachusetts, and temperatures will linger close to freezing in northern Worcester County and into New Hampshire, Vermont, and Maine. There could be a return to below-freezing temperatures later in the day in metro Boston, so be aware of some black ice.

As we head into Monday night, a new storm system is going to explode south of Long Island as it moves up toward the Canadian maritimes on Tuesday. The exact track of this storm system will determine whether we see major amounts of snow Monday night and into the first part of Tuesday over eastern Massachusetts.

This storm will contain a lot of moisture, and there will be a very sharp western edge to this system. That means that if the storm comes close enough, it will throw bands of heavy snow into greater Boston, the North Shore, and even parts of the South Shore. But by no means is this a sure bet.

If the storm wobbles a little farther east, we will miss the heaviest snow and perhaps just see a few inches before it departs. However, the potential is there for what I would consider a quick-hitting snowstorm in a short time later Monday night and into the first part of Tuesday.

Because this second storm will pull down colder air from northern New England, I don’t expect much in the way of rainfall. However, the outer portion of Cape Cod and the islands may stay all rain. We’ll have to evaluate this further on Monday.

The temperature will remain cold during the rest of the week, but it will be dry. I see some moderation next week, so hopefully this all doesn’t turn into the start of a very long winter.

But, of course, that’s what some of you are hoping for. 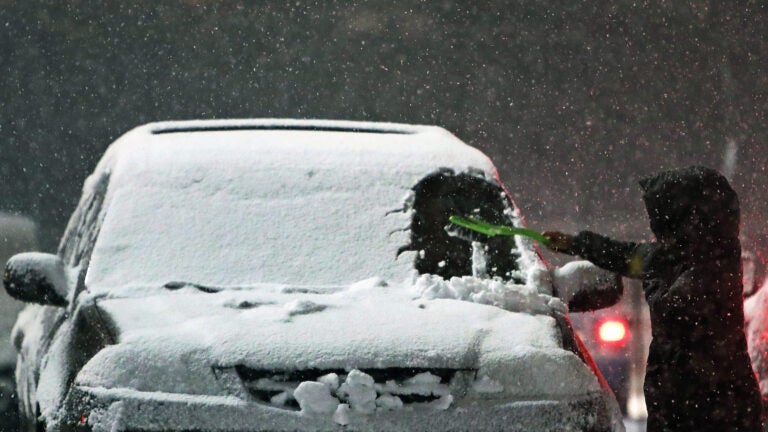