The first powerful winter storm of the season in the East will wind itself up on Monday and plaster the zone from Tennessee and Kentucky to eastern Michigan with snow and wind. Heavy rain and thunderstorms will soak locations just to the east.

The storm will take shape over the Deep South on Sunday, unloading heavy rainfall. Then, it will rapidly gain strength as it sprints from western Tennessee to western New York on Monday.

Snow is expected on the storm’s cold side, west and northwest of its track. By Tuesday, accumulating snow may have fallen in eastern Michigan, western Pennsylvania, Indiana, Ohio, Kentucky, Tennessee, West Virginia and high elevations in western North Carolina.

Along and to the east of the track, heavy rain is predicted from the Gulf Coast to the Northeast. Strong to severe thunderstorms could also develop in the warm, humid air ahead of the storm from the Southeast on Sunday to the eastern Mid-Atlantic on Monday.

As the storm cranks up Monday, it will turn into a big wind generator, which could cause blowing and drifting snow on the storm’s cold side. Windy conditions are forecast to linger in the Northeast through Tuesday.

In the storm’s wake late Monday into Tuesday, some of the coldest air of the season will rush into the Southeast and Mid-Atlantic, a possible preview of a cold, stormy pattern during the first half of December.

After developing near the Louisiana Gulf Coast on Sunday, the storm will draw in cold air as it merges with a disturbance diving south from Canada into the Upper Midwest and Tennessee Valley.

On Monday morning, snow is expected to break out from near Indianapolis into eastern Michigan, including Detroit, before eventually expanding south and east into western and central Ohio and northern Kentucky in the afternoon.

Into Tuesday morning, snow will probably infiltrate western New York and western Pennsylvania on the storm’s backside. Here the snow will be enhanced as cold air passes over the relatively warm Lake Erie.

Models are still coming into focus as to how much snow will fall and where. Both the European and American models suggest the heaviest amounts will focus between Indianapolis, Detroit and Cleveland, with the potential for at least several inches.

Moderate to heavy rain will first break out in the South and Southeast on Sunday before surging into the Mid-Atlantic on Sunday night into Monday morning. Monday afternoon and evening, a slug of heavy rain is expected to sweep north through New England.

The storm system may also trigger some thunderstorms; first, from eastern Louisiana into southern North Carolina on Sunday. On Monday, some vigorous storms may fire up in the eastern Mid-Atlantic from eastern North Carolina into eastern Virginia and Southern Maryland, mainly during the first half of the day.

From Louisiana to Maine, at least an inch of rain is possible, with two to three inches or more along the Gulf Coast and in eastern Maine.

Winds will begin howling Monday afternoon and evening in the Ohio Valley and the Northeast as the storm gains strength. Gusts could top 40 mph in the eastern Great Lakes, possibly causing blowing and drifting snow around Cleveland and Detroit.

Winds gusting over 30 mph are likely to continue in the Great Lakes and Northeast on Tuesday as the storm spins over eastern Canada.

The storm will help to draw very chilly air into the Southeast and Mid-Atlantic on Tuesday, where temperatures will be 5 to 15 degrees colder than normal.

The mild weather pattern which prevailed over the eastern United States for much of November will not persist into December. While frigid Arctic air is not expected, temperatures will generally hover in near-to-below-normal territory for the month’s first week.

A second storm could affect the eastern United States in about a week, although the specifics of its track and how much cold air it will have to work with are still to be determined. Colder air in place ahead of any storm may allow frozen precipitation to extend closer to the coast than the storm early next week.

Forecast models generally suggest a cold and stormy pattern in the East into the middle of December, although confidence in such long-range forecasts is low. 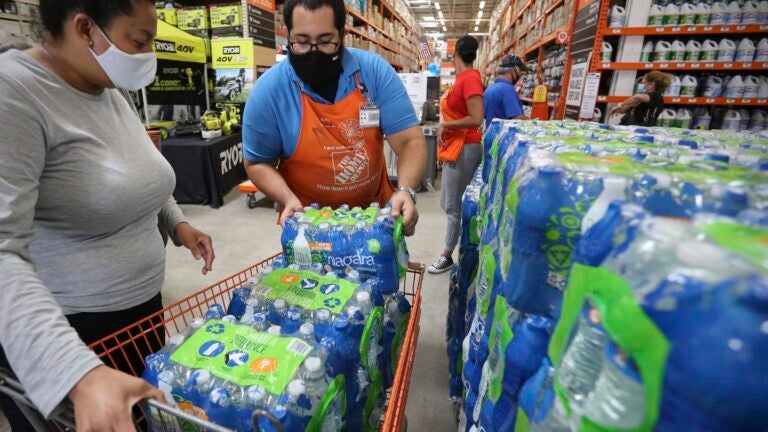