One of my twitter followers asked me the other day if I can tweet about the difference between dew point and relative humidity. While I can certainly be succinct when I need to, I am not sure 140 characters are quite enough to tell you about this concept. If you can follow this blog entry, you’ll have a powerful understanding of this important meteorological concept.

First, if there is something unclear here let me know on Twitter @growingwisdom. I can edit and clear it up.

If you go back 20 years, no meteorologist or very few anyway were talking about dew point to the public. Everything was relative humidity. Then, at some point we all switched and began to try to convey this concept to the layperson. I know from teaching this subject in class that it’s not an easy concept to grasp, but once you do, it really quite useful.

Air
Let’s start with a box of air. Most of you know the air we breathe is made up of oxygen, carbon dioxide, nitrogen, argon etc. Within the air there is also water vapor. It’s simply water in gas form. Like anything with matter you can weigh air and you can weigh the part of air that is water vapor.

Each kilogram (1000 grams) of air has within in it, some number of grams of water vapor. So a box of air weighing one kilogram will always have about 980 grams of oxygen and nitrogen. However, the weight of the water vapor changes dramatically over the course of the year.

Think about that for a moment. The amount of water vapor in the same amount of air can range from under a gram to as much as 20! Why does this change so much? It’s all about the air temperature. As the temperature goes higher, the capacity of it to hold more water vapor grows. I tell my students to think about warmer air like a big box with a lot of capacity for water vapor and cold air like a small box with much less.

The chart below shows how much many grams of water vapor you can squeeze into a kilogram box of air at various temperatures. Notice how much higher the number go as it becomes warmer. These numbers are how much water vapor is possible, but that doesn’t tell us how much is actually in it.

Relative humidity
With this knowledge, we can now talk about relative humidity. The word relative is the key to the term, not the word humidity. If you tell someone you won a race in your age group, they might ask how many people were in it. Coming in first is much more significant if there are 100 people in your age bracket, not two.

Relative humidity is a simple equation.

It’s how many grams of water vapor are in the air divided by the amount the air could hold. So you can have the relative humidity be 50 or 60 percent, but still feel pretty badly because there is so much water vapor in the air. A temperature of 95F with a dew point of 77F would give you a relative humidity of just under 60%, yet it would be one of the most uncomfortable days possible in New England.

If the relative humidity is 100 percent, it’s not telling us anything about how we feel; only the air is holding as much as it can. So on a clear calm morning in October when the temperature is 32F the air can hold 3.8 grams of water. If the dew point was also 32F, there would be 3.8 grams of water in the air. On that particular day the relative humidity would be 100%, but you certainly wouldn’t notice it beyond scraping the frost off your car.

It’s not relative humidity which tells us how we feel, it’s the dew point. When the dew point reaches about 60F there is about 10 grams of water in a kilogram of air. At this time most of us begin to notice the moisture molecules. As the amount of water vapor in the air climbs, our comfort level decreases because we can’t sweat as efficiently. 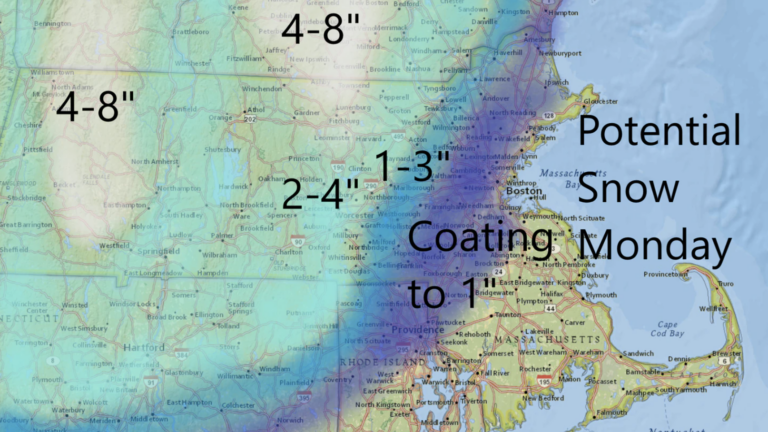