Seasons last 3 months across our area, except of course in Maine where there are only two- “winter and July 4th”. While that old Marshall Dodge joke might be a bit of an exaggeration, this winter is going to be longer, colder and snowier by far than last year. Now while anyone could have told you that tidbit, the question on many minds is just how much colder and snowier? This week we will have two shots of cold air, the first will be chilly and slightly below what you would expect for late November. The second blast of cold air will be even colder and make it feel more like January. Between the two air masses there will be a storm that brings some rain and snow to the region. The exact track of the storm will determine just how much of both we receive. As of late this evening the chances of any measurable snow are decreasing. So snow lovers might have to just wait a bit longer. Look for updates on the storm via Twitter at @growingwisdom Before any snow happens we have two cold days today and tomorrow followed by clouds increasing Tuesday with snow arriving around dusk. Temperatures will reach the 40s during the day but fall back to subfreezing levels each night. The clouds that are around this afternoon are the remnants of the snow across the Great Lakes.

Meteorologists and astronomers mark the seasons about three weeks apart. For meteorologists, winter begins on December 1st and ends February 28th. Astronomers base the seasons on the movement of the sun’s position each day. Therefore winter starts on December 21st when the sun is at its lowest point in the sky at noon here in the northern hemisphere. On December 21st the sun will only reach about 23 degrees above the ground around noon. For perspective purposes, the sun reaches 71 degrees above the horizon at noon in June. The reason there is a difference between the two groups of scientists is that the weather folks think of winter as the coldest 90 days of the year and don’t focus on the movement of the planet in relation to the sun, like an astronomer. On average, December 1st-20th is colder than March 1st through the 20th so the former gets lumped into winter and the latter into spring.
This week, we will end meteorological autumn more like winter as temperatures fall into the 20s each night and by the end of the week I expect many of us to see temperatures into the teens. During the day highs will rebound into the 40s the first half of the week, but should not get out of the 30s heading into Friday and next weekend. Indeed the next 5-8 days will average quite a bit under the long term averages. (A sneak peak shows a big warm-up a few days into December)
Besides the cold we will be watching the potential for accumulating snow sometime Tuesday night or Wednesday. Once again, we have a coastal storm in the forecast. As will be the case all winter, the exact track and strength of the storm will determine just how much snow we get.

Unlike last winter when the storm track along the east coast was virtually non-existent, this winter indications are for the Atlantic coastal route to be a popular one. When we look back at winters it only takes a few major storms of 10 inches of snow to make a typical one. Last year’s record low snow fall may not be seen again in our lifetime, it was that far out of the average. Back to our storm potential this week. The track right now will take the storm close enough to bring some snow to the area, but the heaviest appears to want to stay offshore or over southeastern Massachusetts, Connecticut and Rhode Island. Obviously, this track will fluctuate and so too will the predicted amounts. I would say Boston may get a dusting but even that could go out to sea. More Monday on the system.
There are a number of factors that play into this winter’s weather. El Nino and La Nina both look to be non-existent which means we are in a neutral phase of that pattern. Neutral phases typically lend themselves to oscillating periods of the cold dry jet stream, the polar jet, in control followed by the warmer and more moist jet stream, the subtropical jet in control. When these two jet streams come together just right we get our biggest and most intense snow storms.

North Atlantic Oscillation (NAO)
Last year this important variable was mostly stuck in the positive phase. So far, we have see the NAO in the negative phase which can typically mean colder and stormier weather for New England. Click on the image to see it enlarged.

Notice how there are decade long periods when the NAO is in either the negative or positive phase. If you remember your childhood as cold and snowy, odds are the NAO was negative.

How much snow?
If you look at all the winters for which we have records generally years after a very low snow total season are significantly higher. The biggest jump ever recorded was between the winter of 1994-1995 when only 14.9 inches of snow fell in Boston followed by 107.6 inches the next winter. That increase is unprecedented in our records. I expect us to see between 35 and 45 inches of snow this year in Boston a significant increase from last season, but not record breaking.
Gardening this week
This week I am continuing the long process of putting the gardens to bed for the winter. I don’t cover tender plants until the ground is frozen. Putting straw, hay etc. around the plants too early creates a good home for mice and voles. I did plant my garlic yesterday however, just in the nick of time I feel. Check out the video below to see how I mulch many of my plants for winter. 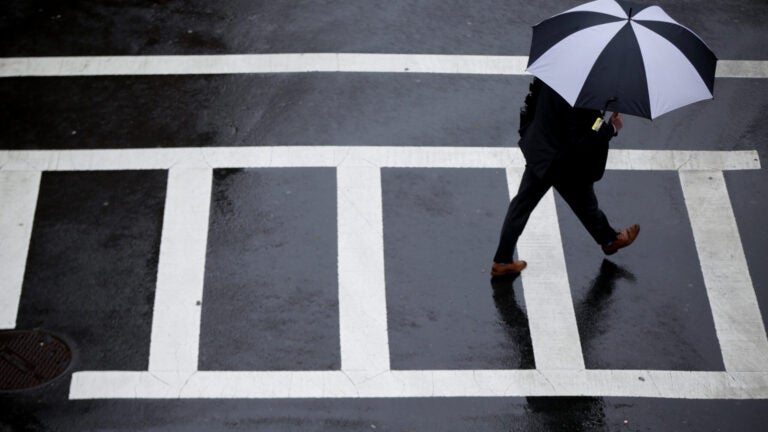