Snow, mostly light but some moderate has broken out across much of the area as we head into the evening hours. The snow we have seen during the day was caused by cold air rushing over the mild ocean water. This is the same way they receive lake effect snow in Buffalo.

All areas are going to see accumulating snow this evening with a change to rain across the extreme southeastern areas of the state early Sunday morning. There is still a winter storm warning for areas in pink. on the map and a winter weather advisory for the rest of the area.

Milder air is going to push inland from the coast during the storm. I expect Nantucket and Martha’s Vineyard to change to rain after only an inch or two of snow. The rain snow line will then push towards Cape Cod, Plymouth, Boston and even briefly make it into the Route 128 or even Route 495 belt as the precipitation is ending. You can see on the map below how far inland the mild air is expected to be by tomorrow morning.

Snow, currently light and fluffy and become heavier and wetter at the coast as the night progresses. The snow should stay on the less dense side inland, but there could be a small crust of sleet or freezing rain at the end of the storm early Sunday morning. I don’t expect any mixing over northern or far inland areas.

Although there will be flurries this morning and some light snow this afternoon, the steadiest and heaviest doesn’t arrive until later tonight.

Temperatures will stay steady this evening and then begin to slowly rise throughout the night. As the warm air moves inland after midnight temperatures will rise. By dawn, Boston, Norwood, Providence and points south will be well into the 30s with 40s over the Cape and Islands.

Driving will become more difficult overnight. The later you are out, the poorer the conditions will become Living in New England, I don’t feel we should cancel events every time there is a few inches of snow. Of course, do whatever is the right thing for you.
The bulk of the storm arrives after 10PM as the snow becomes heavier and steadier. After midnight some areas will see snowfall rates around 1 inch per hour as the heaviest of the snow moves through the region. The map above shows how much new snow will be on the ground around 1AM

At the same time the heavy snow is occurring, the rain/snow line will be steadily moving northward. The key to the accumulation forecast depends on exactly when the snow flips or mixes. Since it will be snowing so hard just prior to the changeover, a difference of 2 hours, could mean a difference of up to 3 inches.

The highest risk areas to the forecast are the lower part of Cape Cod, inland areas of
southeastern Massachusetts and Rhode Island and the immediate east coastal areas around Boston. Here, if the warmer hangs on a bit longer or leaves earlier, snow totals could end up a few inches above or below where they are predicted.

Those of you on the south shore and into Boston, I highly recommend getting up very early tomorrow if you hear the precipitation changing to rain. Shoveling will be exponentially easier to do as soon as the change happens as the snow will become heavier quickly.

There won’t be a flash freeze, but temperatures will fall below freezing by the afternoon making it difficult then to clean up.

The weather turns very cold to start the week with a few snow showers Tuesday after a sunny day Monday. A moderating trend takes place by the end of the week with highs getting back above freezing and even close to 40F, which is normal by Friday.

Weekend garden tip
The video is from a few years back, but the tips on caring for a living Christmas tree are the same. Enjoy. 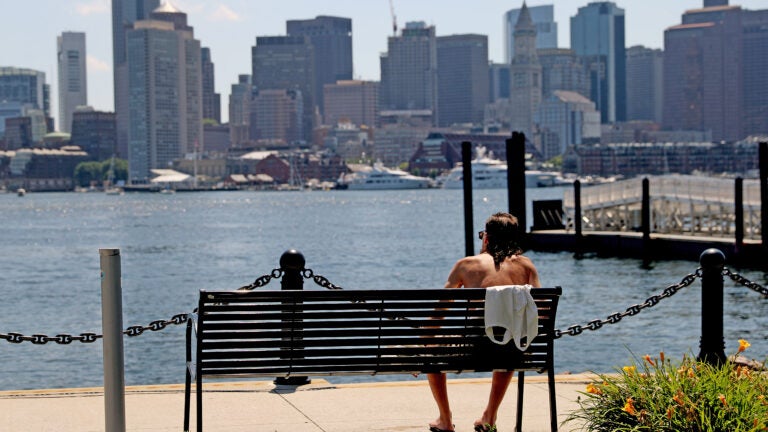