The heavy precipitation is now upon the region. It’s snowing so hard the snow is pulling down cold air from above. This means places like Brighton and Watertown where it was raining, it has changed back to snow. Parts of Boston will see most of their accumulation of snow over the next several hours. This isn’t the time to be leaving the office The heaviest bands move through by 3PM to 5PM, so just wait this out and then you will be able to head home much safer.

Where it is snowing, travel is going to be very difficult until the evening commute. I do not recommend you leave work and head west or north. before the heavy band of precipitation lifts northward.

The morning blog is below.

Let’s start with 5 bottom lines on this storm. First, it’s not big snow event for eastern Massachusetts. Second, this isn’t a coastal flooding event. Third, snow will be heavy and wet and even a few inches will be difficult to move especially after the rain. Forth, the heaviest of the snow occurs in the Boston area and immediate suburbs before 3PM. Fifth, there will be a wide range of snow totals with amounts increasing the further west and north you live.

The snow will continue to become heavier this morning while at the same time the warmer air moves north and west up the coast from Cape Cod. There will be an inch or two of snow over Cape Cod as the air is just cold enough to allow for snow at the onset of the storm for a couple of hours.

By now most of you know the key to the forecast is the rain/snow line. The immediate Boston area as well as within a few miles of the ocean north along Route 1 and south along Route 3 is where the rain/snow line can fluctuate later this morning and early this afternoon. It is in these areas where snow could accumulate as much as 5 inches or as little as an inch or 2. Since the snow will be coming down at rates of 1 to 2 inches per hour later this morning, a difference of 2 hours of snow versus rain will show up as dramatically different accumulation amounts when this storm is done.

The accumulation maps are based on the rain/snow line moving into Boston sooner in the late morning rather than late this afternoon. IF the snow continued through 3PM in Boston, (which is not likely) the snow amounts would double from what you see on the map. If the rain begins earlier, (is possible) the amounts would be cut in half. So if you want to know what I’ll be watching all morning, it’s the temperature.
I’ll update more information and you can ask questions to me on Twitter @growingwisdom.

The maps below show the predicted radars for the duration of the storm. Notice the rain/snow line around Boston by late this morning and then pushing well west of Route 495 by sunset. There will still be some icing over interior areas during this time.
For nearly everyone the snow will become increasingly heavier throughout the storm and really heavy in areas which see a complete switch to rain. I recommend shoveling as frequently as possible and I will also be updating where the rain/snow line is on Twitter throughout the storm.

Winds
Winds are going to increase this afternoon along the coastline and continue through the first half of the overnight. The winds will be strongest along the coast. Those of you inland won’t see winds gusting to 50 miles per hour, but if you live along the water you will experience high winds for many hours later this afternoon and evening. The winds die down over Cape Cod in the early evening as the storm moves by and over Cape Ann late tonight.

Power issues
There are three reasons you could lose power. Along the coastline the high winds could create a power outage. Inland the heavy wet snow may bring down some power lines or trees onto power lines. Further north and west of Route 495, some icing could contribute to power outages especially in exposed areas where there is more wind.

Overnight lull then backlash
There won’t be much going on overnight until after midnight. During the 7PM to 1AM timeframe some spotty freezing rain inland or drizzle or light rain could fall. Then, as colder air works back into the area, backlash snow will move eastward. This last batch of precipitation from the storm could add a few inches to the snow totals over northern Worcester and Essex Counties, but I am not expecting more than a coating to an inch in the Boston area. This could be enough snow to snarl the Friday morning commute a bit before the snow ends around 7 AM to 8 AM.

Friday and Saturday
Sunshine returns later tomorrow with a blustery breeze and chilly temperatures in the 30s. Another big ocean storm will brush by (it better not move west) and bring some clouds and flurries or a period of light snow Saturday. This will not be more than a coating to an inch or two. More on this part of the forecast later.

Sunday
The final day of the weekend is bright and sunny with highs only in the 20s. It will be a good day to enjoy the new snow, but so cold you won’t be able to move any of the slush, that will be a frozen brick.

Next week.
There are still many indications of milder air later next week. It also appears we could see more rain or snow Tuesday or Wednesday. I don’t have high confidence in the long-range forecast right now as the atmosphere will be in transition. I’ll update during this weekend. 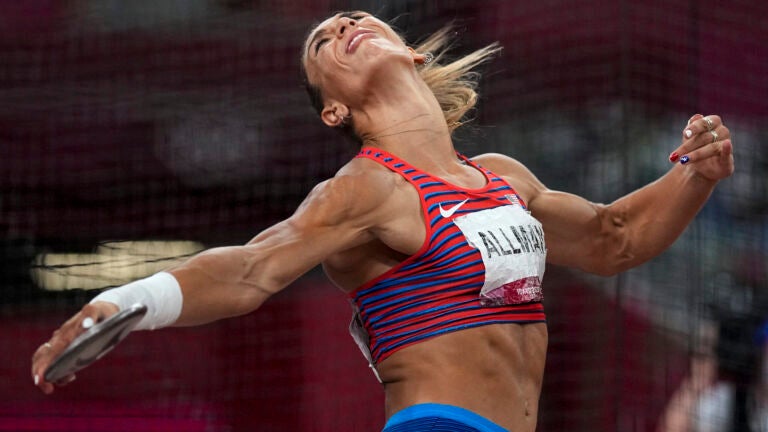 In the driving rain, Valarie Allman, a former dancer, wins gold in the discus throw for Team USA