There is little change to my thinking from earlier this morning. The storm is still on track and I am leaving the maps intact this evening. The bulk of the storm will affect the outer and mid-Cape regions. I’ll provide an update this evening with some more details on timing and of course all day Tuesday.

This morning blog
Temperatures are running cold enough today so I can call this more of a January-like day rather than the start of the final week of March. This cold air will remain in place for the upcoming storm and therefore snow is back in the forecast.

Sunshine is bountiful all day with a high in the upper 20s. There will be some wind at times making it feel even colder. Another winter-like night lies ahead with lows back into the teens. We start Tuesday with sunshine and end with clouds. Highs reach the 30s, still below average.

If you are someone who flips around and watches or reads all the different weather forecasts you will see predictions ranging from 1 inch or less in Boston up to 6 inches. It can be confusing for anyone when they see this.

The reason for the discrepancy is of course the computer models we all use to make the forecast. The European model is the furthest west and gives the most amounts of snow and wind to the region. The model has been quite consistent in its prediction, something which brings more confidence to the table.

Other models like the Canadian and GFS keep the storm much further offshore and barely have any snow in Boston with a few inches over Cape Cod. If the storm ultimately passes further out to sea then the snow amounts won’t be very high, even over southeastern Massachusetts.

What I do know is one monster of storm is going to develop and a wobble of 50 to 75 miles, in either a west or east direction, will change the forecast. Something to note, even the most aggressive of models still doesn’t give Boston a major snowstorm (foot or more).

Impacts to most of you will be small to none. If you live in and around Boston you can expect some snow and wind to slow down the morning commute Wednesday. Further south and east the impacts will be greater and much of the day Wednesday will have slow travel. Even there, the evening commute will be much improved.

Further northwest, a winter storm watch is in place for the chance of over 6 inches of snow, if the odds of this happening increase the watches will become warnings. The watch area doesn’t include Boston or even the immediate suburbs to the south.

The map below shows my best estimate for snow based on all the information available. These totals could increase or decrease later today as new information becomes known.

What all forecasters will be watching today is trend. I’ll be analyzing if the models and their ensemble counterparts push the storm further east or west. The trend of the information today is going to be critical as to how I (and everyone else), handle snow amounts this afternoon.

The National Weather Service puts out a great series of maps on probabilities. Below is one of the maps which show the chances as of this morning of areas seeing up to 4 inches of snow. Notice how the odds increase as you move south and east of Boston.

Milder air will be here for the end of the week and part of the weekend so I expect melting to resume in earnest and nearly all of the new snow to be gone rather quickly. After a brief shot of cold air later in the weekend and early next week, temperatures again become seasonable to even dare I say, above average. 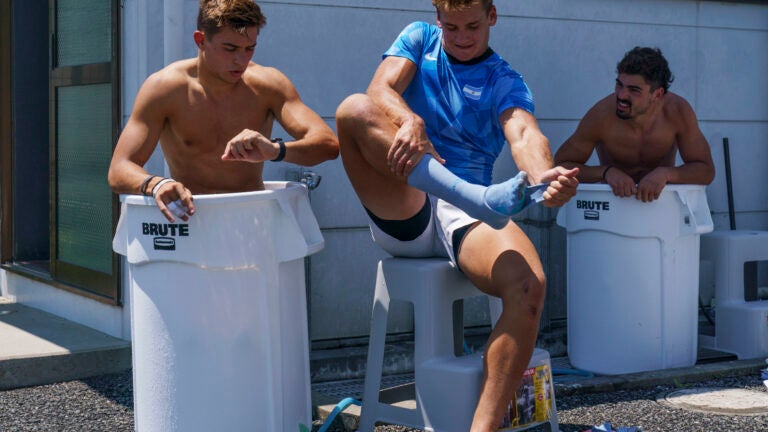