My little pond I made several years ago in the back yard had a thin coat of ice this morning, an indication of course of below freezing temperatures. While the weather has made the turn from winter to spring, mornings with temperatures I the 20s and lower 30s will still be commonplace for several more weeks.

Enjoy the next two days of spring weather. This afternoon will see highs well into the 50s and tomorrow is even a bit milder. Both days feature plenty of sunshine.

The cold nights are allowing the snow in the ski areas to melt slowly this year. Back in 2012, I remember skiing in March at 80F. Water was running down the trails in river-like fashion and I had to stay clear of the bare spots.

On Thursday, I went to Sugarloaf ski area up in Maine to get in a day of skiing. While all the storms were great news for the mountains this year, I found myself doing more forecasting of the snow than skiing on it. Thursday was my one day to hit the slopes.

If you love spring skiing, this is likely about as good as it will get in April. While conditions will change in the coming weeks, at least the first half of the month is going to be amazing. Cold nights will bring more of that corn type snow early in the day, with the snow softening up after 11AM. Temperatures this week will be mild, but not excessively warm so as to cause rapid snow melt.
There’s rain in the forecast for Monday night and Tuesday for all of New England. Rain of course does melt the snow, but I don’t expect the rain to last more than 12 hours and temperatures will be in the upper 30s in ski country during the rain.
You can follow my forecast and gardening tips on Twitter @growingwisdom
A storm now in the Gulf of Mexico area is going to move northward passing west of New England Monday night and Tuesday. This will drag a flow of mild and moist air along with it and bring a period of rain Monday night and Tuesday morning. The amount of rain should remain in the half to one inch rain with most of it falling from 11 PM Monday until 10AM Tuesday.
Now that the lawns are bare, if you’ve already had an opportunity to pick up the winter debris, this is a good time to put down some lime and fertilizer on the lawn. You can also give other trees and shrubs a bit of slow release fertilizer now.
The Tuesday morning commute does look wet and likely a bit slower than usual with some big puddles on the roads. As you know, any amount of precipitation has an adverse affect on driving. By the homebound commute on Tuesday the rain will be over and there could even be a bit of sunshine. It will be mild with highs in the upper 50s in many places.
The rest of the week does appear to be dry with seasonable temperatures and a lot of sunshine. I don’t see any significantly above average temperatures on the way for at least the next week which bodes well for the ski areas and also allows a gentle ease into spring. 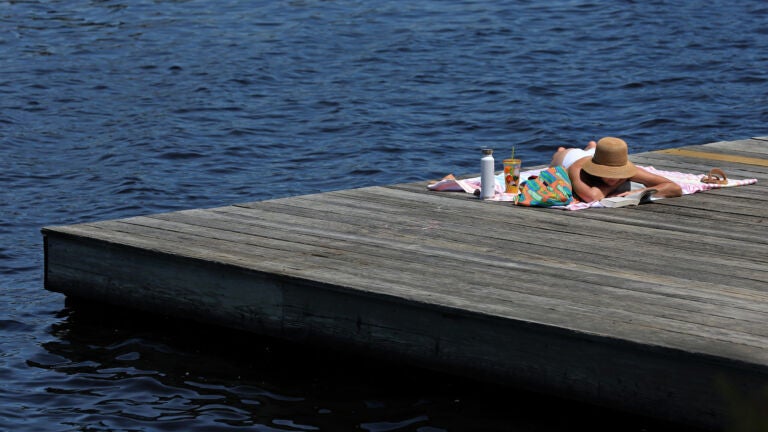