I’ve mentioned before one of the first things I do when I open my eyes is grab the digital thermometer next to my bed to see where the temperature stands at 5AM. This morning, the 8 looked like a zero for a second and I thought we had somehow fallen to 20F. The good news, the reading was actually 28F, a full degree warmer than yesterday. It might not seem like a big deal to be a degree milder, but I do have some flowering trees and shrubs in the garden which would have been blackened (not killed) by a 20F degree reading.

Yesterday was a cold day. The high in Boston only reached 40F yesterday a full 16 degrees below the average. In terms of highs on April 17th, yesterday ranked high as one of the coldest April 17th’s on record. The coldest high temperature for the day was set way back in 1880 when it only reached 39F.

This morning is another frosty morning with some coastal clouds courtesy of an east wind. This flow will keep coastal towns chilly once again. I expect Boston to be about 5 degrees warmer than yesterday, which is still chilly. This will be the last of the cold days for a while, but I’m not ready to say we won’t have any more days where it stays under 50F just yet.
The records for the coldest daytime highs continue to be under 50F until the last two days of May. In other words, in a spring where cold snaps it’s possible to not reach 50F for another 6 weeks. Our pattern of Canadian cold pushing into the northern part of the United States hasn’t completely broken. Looking at the long range there are signs of more chilly air again mid-week next week.
Holiday weekend
For many, Good Friday is a holiday meaning fewer people on the road and lighter traffic for everyone. At least if you must go to work today, it will be easier to get there. There will be plenty of sunshine this afternoon, but coastal clouds will block out the sun periodically this morning. If you watch these clouds moving, they are coming from the east. Inside of Route 495, at times it will be almost completely cloudy. It can sometimes be difficult to erode these types of ocean clouds, so I wouldn’t be surprised if some shoreline areas see very little sunshine today, while inland it’s brighter. A few mileswill make a big difference in sky condition today. Temperatures will be mildest west of Route 128 where it will reach near 50F, but east of there it stays in the 40s.
The image below from 7AM shows clouds over Cape Cod and into Boston.

Earlier this week it appeared there was a chance of a few showers Saturday morning, now those have been removed from the forecast. While we may see a few clouds early in the morning, the day will basically be sunny and with a westerly wind highs will reach 60F or even a few degrees milder.
On Sunday, a north wind will help drop temperatures. It will only reach the mid to upper 50s inland but stay a very cool 49F or 50F in Boston, quite typical for April 20th.
Patriot’s day will be sunny and quite mild. Highs will reach the mid-60s inland. In Boston the expected high is around 63 or 64F. The maximum temperature for the day this time of the year usually occurs around 3PM.
The chart below shows temperatures in Hopkinton on Monday. Notice how quickly readings increase after 8 or 9 AM. It will be cool while runners are waiting to start, but they will be shedding their sweatshirts quickly once the race begins.

The dry weather continues into Tuesday with more mild April air. The next chance of rain arrives sometime during the middle of the week. 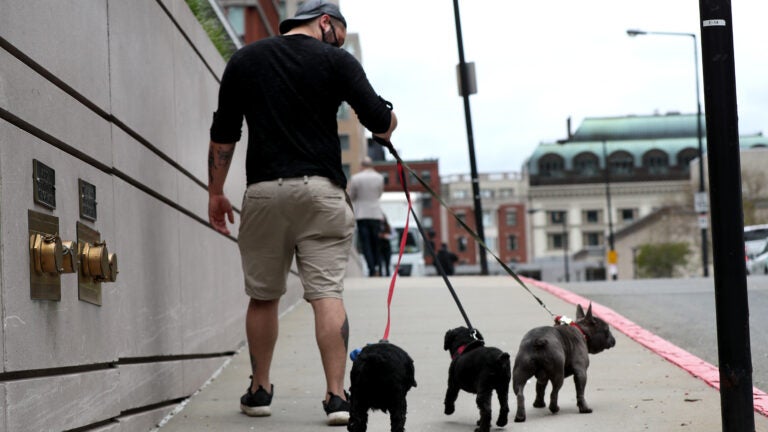