I finally put the heat on yesterday. The temperature inside the house got to 54F, I figured that was getting a bit ridiculous, so on it went. What’s funny is that I’m likely going to be tempted to put on the air conditioning late Wednesday to take some of the humidity out of the house. While it’s going to be warm, it’s really the mugginess you will notice tomorrow night and Thursday.

This time of the year when we have a southerly wind, moisture collects in the lower levels of the atmosphere and that is why we start with a lot of clouds. Since the sun is not as strong as it was 10 weeks ago, it takes a lot longer for the clouds to break. Sometimes the low clouds can stay in place much of the day, especially along the coast. Those of you who do see sunshine today will have the warmest afternoon temperatures reaching the 70-75 degree mark. Radars are quiet as I write this, so showers won’t be an issue.

The same pattern repeats itself for Wednesday. Once again the morning is the cloudiest period of time with the afternoon brining a few breaks of sunshine. The air will be even warmer and on Wednesday if did see enough hours of sunshine 80F isn’t impossible. The official forecast you see from me or most anyone else will have highs 73-77, but if we get that sunshine, we are going several degrees higher.

Tropical Air
With this tropical flow of air showers are not impossible to occur on Wednesday, but the bulk of the day is certainly rain free. The real rain action holds off until Thursday. Before we get there we will have a very summer-like night Wednesday with temperatures staying in the 60s. This is why I wrote about the need for the AC. By Wednesday evening it will be feeling a lot more humid as well.

A very slow moving cold front edges ever so much closer Thursday and starts to get close enough to produce showers. In the early part of the day while there could be some rain, I’m thinking it’s more of a widely scattered type of situation. The morning commute will be damp, and some wiper usage is possible. As we get deeper into the day showers will become more numerous and the evening commute could be impacted by some downpours. The exact timing of the heaviest rain can still change by 3-5 hours so I don’t want to commit the evening commute to big puddles just yet.

The map below shows most of the rain still to the west of eastern Massachusetts around 2PM on Thursday. You can follow me on Twitter @growingwisdom for more updates.

The New England Patriots are in Foxborough Thursday evening and as luck would have it, the weather is going to be a factor. Unless the cold front slows down dramatically, there is going to be periods of rain, some of it very heavy during the game. Thunderstorms aren’t out of the question either making for a very wet game.

Head of the Charles Regatta and the Weekend.
Friday sees clearing, drying and cooling conditions. It’s actually still going be quite warm with a blend of clouds and sunshine and highs nearing 70F. On Saturday a secondary cold front crosses and while the day may begin with sunshine clouds could build enough to bring a quick shower or even the rumble of thunder. Sunday is a cool and dry day wonderful for being on the banks of the Charles River and watching the final day of the race. 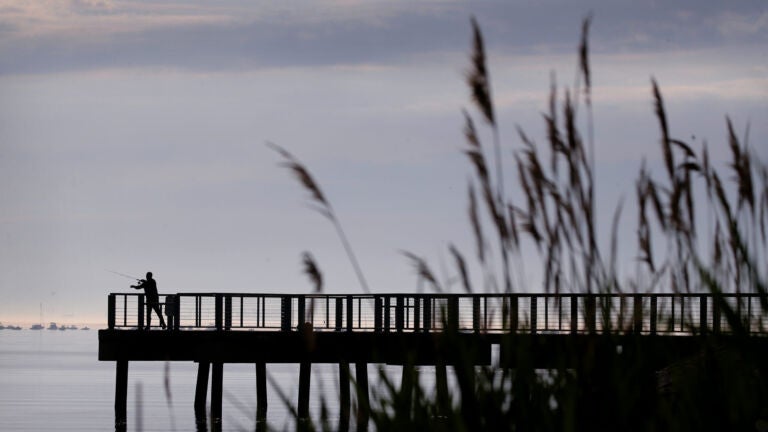