Someone tweeted me a question yesterday asking if the media was hyping the storm or we really were getting a nor’easter. The answer to the first part of the question is probably, (depending the media source) on yes to the second part.

A nor’easter is simply a low pressure area that moves up along the eastern seaboard bringing with it northeasterly winds. You could also say winds come from the northeast during one of these storms. You can have a nor’easter anytime of the year, even July.
Many of you likely hear the word nor’easter and immediately think snow. This isn’t incorrect because our largest and most intense snowstorms are nor’easters. However, we can also have heavy snow without one.

With that bit of meteorology cleared up, let me outline the weather the next few days. You’ve likely heard the storm is going to last through early Friday making this a 3 to 4 day nor’easter. Storms do stall and bring long periods of rain and snow. One of the most extreme examples occurred back in 1969 in the 100 hour snowstorm. That storm stalled along the coast in similar fashion. Boston received over 26 inches of snow and the snow total stood as the city’s largest until 1978. Interestingly, 1969 was an El Nino year, similar to what we are expecting this winter. This is part of the reason some are forecasting a cold and snowy winter.

Storms that move this slowly, while certainly keeping clouds and damp weather over the area, will not bring heavy rain for 3 days. (at least not to southern New England). There will be periods when it’s just cloudy with some spotty mist or drizzle, at other times heavy rain will ensue. The surface map loop below shows how the storm will move over the next several days. The L off the coast is the storm and you can watch the dates change at the top of each map.

Unlike some coastal storms, beach erosion and flooding shouldn’t be a problem with this event. Tides are astronomically low and the strongest winds from this storm will be well to the north. Part of the Maine coast north of Portland may have some minor issues, at worst.

Rainfall totals will end up in the one to three inch range with most areas in the middle of this. The bulk of the rain should fall Wednesday night into Thursday. The map below from Weatherbell Analytics shows how much rain the GFS model is forecasting through Friday afternoon.

Until we get to Wednesday evening the rain is more showery in nature. The map below is a radar forecast for later this morning. Notice most of the area is rain-free, but there are showers in spots at this time. It won’t be a great day to rake leaves, but you won’t be dodging heavy rain all day either.

The showers will be widely scattered and most numerous over southeastern Massachusetts. If you do see a shower this afternoon it could be briefly heavy.

This same on again of again pattern continues through the night and into early Wednesday. The steadier and heavier rain will wait until the afternoon or evening tomorrow to begin. This means the roads will be wet in the morning, but it’s the evening commute that might see problems from actually heavy rain.

Thursday sees steady rain, especially in the morning. Later in the afternoon the rain will taper to drizzle again. Friday, the storm is close enough to bring clouds and the chance of morning showers, but improvement will slowly occur from the southwest later in the day. This sets up a nice weekend filled with sunshine and pleasant late October temperatures.

While it’s cloudy and wet the next few days we won’t see much of a change in temperatures from our highs in the upper 50s to near 60 and around 50F when you get up in the morning. 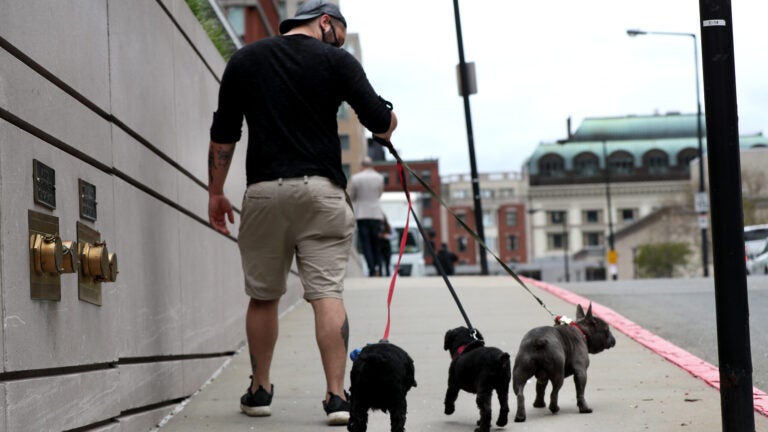