The nor’easter raged overnight with heavy rain, wind, thunder and lightning. The power went out in multiple communities and is still out for hundreds of people, mostly inside Route 128. The major band of rain continues to shift further north and west, but there will be showers around the rest of the day and into the evening.

As I write this there are still flood advisories and warnings for many communities around and north of Boston. If you are driving and do come upon a road that is flooded, don’t drive through. No one wants to be the person the next YouTube video showing you on the top of your car.

For most of us, this is just a big windy rainstorm and the rain, while heavy, is needed. This is the first time in 6 months I have seen any water in the hole that contains the sump pump in my basement. I can’t recall such a long period with such overall dry conditions. I feel much better about the drought situation in parts of the area this morning.

We aren’t going to see much sunshine today and it’s also likely we see cloudy skies much of tomorrow. Showers are most likely the first half of the day, but can occur at any time.

Cape Cod Sunshine Moving North
Over Cape Cod it’s sunny right now and a beautiful morning. This clearing is caused by dry air moving into the nor’easter and this dry air could move north and bring some breaks in the clouds even into Boston. The tweet from @fmaguire illustrates just how nice it is there.

If you do see sunshine, the clouds will again take over as the storm continues to rotate and fill.. Highs will be mostly in the 50s, although if you see some sunshine, south of Boston, 60 or higher is certainly reachable.

The two radar projections below are for early afternoon and then later this evening. While there are showers around, they are progressively becoming more widely scattered.

Friday A Bit Better
Showers remain in the forecast tomorrow, mostly in the morning, and clouds will be abundant. Highs will be in the 50s to near 60F. Slow moving systems like this one often bring very variable conditions on the final day of their influence. The sun could come out for a while, but showers can also pop-up in the still unstable pattern.

Weekend Looking Great
Sunshine returns in earnest Saturday and Sunday. A weak system might bring a period of showers late Saturday night, but will be book-ended by nice weather. Highs over the weekend reach 60F on Saturday and get close again on Sunday. A warming trend follows for Monday and 70F isn’t not only out of the question by the middle of next week it’s looking likely! 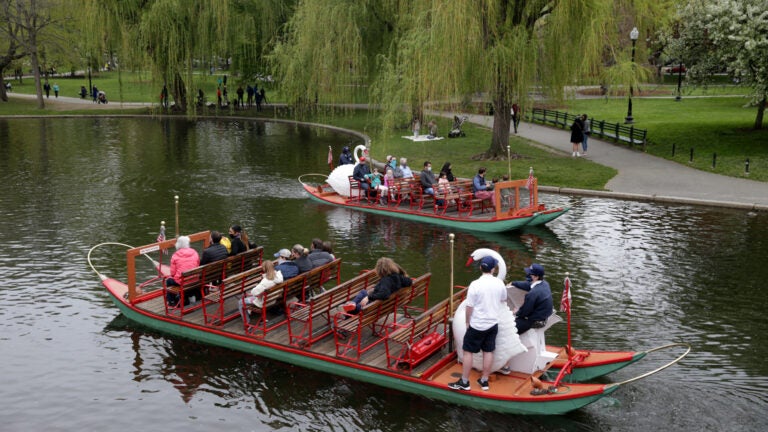