This Blog Gives A Rolling Set Of Up

Follow @growingwisdom
8PM Radar Update
The latest radar loops show snow bands continuing to push east. As of this update some of the heaviest snow is located along the Route 495 belt.

5:30PM Update
On Tuesday, all #MBTA rail services (Subway, Trolley, and Commuter Rail) will be suspended all day.

4:30 PM Update
We are mostly done. There are still areas of moderate snow. Look at the radar loop. Notice the green areas, those are areas of heavier snow. Because of the coastal front (contrast of cold and warm air) I have to leave the chance for 1/2 an inch up to 3 inches through the overnight. The upper amount is especially true along the coast. You could head out to clear the snow, just know there might be a bit more in the morning to clean up.

2:00 PM Update
Here’s a map of about what is left before it ends. As you have seen during this storm the snow amounts vary a lot in a short distance. I think Boston sees the snow stop between 3AM and 5AM. Most of the accumulation will be over by 11PM.

1:30PM Update
Here are some latest totals of snow.

Latest hi resolution models continue to show more snow in small area through much of the evening. Areas in purple could see an estimated 5-9 more inches before this is over. This amount of snow is creating a public safety issue in some communities.

Snow continues to fall heavy at times especially east of Route 495. This snow is going to taper to lighter snow this afternoon and evening, but I don’t expect it to end until late tonight. Some areas will still be snowing early Tuesday.

20 inches has fallen in parts of Rockland, MA since the storm began. The highest totals are over the south shore south of Boston.

12 Noon
Bands of heavy snow are moving west to east either side of the Massachusetts Turnpike. Snowfall is rates of 1-3 inches per hour are common along this path. This will mean totals in these areas end up at the high end.

10AM 2-9-15 Update
Here’s an image from the folks at the National Weather Service. These are projected storm totals since the entire event began Saturday so they include what’s on the ground, plus what will fall this afternoon. See my maps below for how much more is on the way.

9AM 2-9-15 Update
Snow continues to fall at various rates this morning with a wide range in accumulations. It really depends if your town has been under some of the heavier bands. It appears the south shore around Norwell, Weymouth,Brockton into metro Boston has been hardest impacted by the snow overnight and this morning.

Visibility is under a mile in many places making travel slow, but not impossible in most areas.

Snow will continue to fall today. The image below shows where the snow was heaviest just before 9AM. 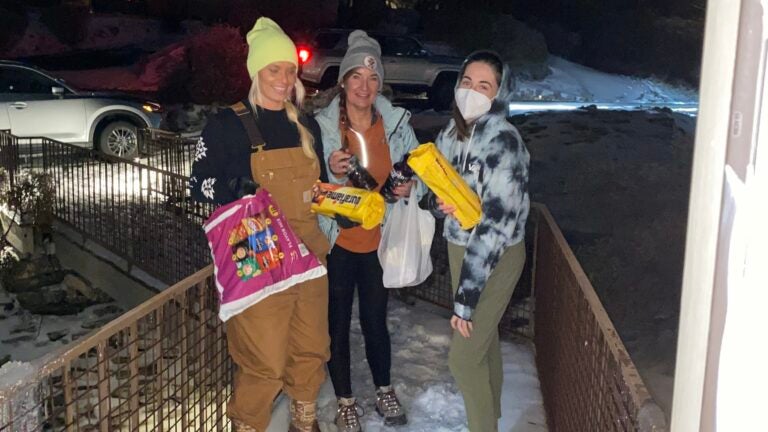 A Bostonian moved to Texas, then lost power for nearly 5 days. These two strangers showed up to help.