Melting snow, unless you are a ski enthusiast, those words are likely music to your ears. This week, temperatures are going to reach the melting point every day and therefore the snow will continue to disappear.

Because snow is a solid, it can take on the temperature of the surrounding air. Have you ever felt how cold the surfaces of your counter tops get in the house? What about the metal tip of a ski pole? If you put your tongue on the tip of a ski pole while riding a chair lift on a bitter cold day, your tongue will get stuck to the pole. The reason your tongue freezes to the pole, is because the metal is so cold it can instantly freeze the saliva on your tongue to it. (Yes, I know from experience, but only once).

Snow isn’t at exactly 32F, any more than the ice in your freezer is at 32F. The colder the air in your freezer, the colder the ice will become. Ice at 31F will melt much faster than ice at 10F, because the colder ice needs to absorb more energy to reach the melting point. The same thing is true with the snow on the ground.

The map below shows the temperature of the snowpack this morning. Notice across the south shore of Massachusetts the snow is approaching 32F or melting. This means in those areas there will be a more rapid loss of snow this week. The colder snow across the coast of Connecticut and Rhode Island as well as in pockets over Cape Cod is because of the newer snow that fell on Friday. That’s is why there is a blue strip of color in those areas.

Snow Can Be Very Cold
In order for snow to melt, it must reach over 32F, the snow in Maine won’t melt nearly as fast as the snow in southern New England because the snow there is so much colder. Where there snow is colder, a larger percentage of the sun’s energy this week will be used to get the temperature of the snow closer to 32F. Snow melt becomes more rapid as the average snowpack temperature reaches close the melting point.

The type of snow on the ground is also critical in determining how fast it will disappear. At this point, nearly all of the settling has occurred of the snow. However, as the snow warms and does melt, it will become denser and compact further. By the time we are down to our last 3 to 5 inches of snow, sometime late this month, what’s left will be very dense. Those last few inches of snow are often the toughest to melt because of its density and the fact the ground is still frozen solid. There will be a cooling effect from the bottom up until the ground is thawed.

If we had seen at least 6 inches of snow before the ground froze, then there would be some melting from the bottom of the snowpack this year. However, the bare ground and cold combined the first three weeks of January to allow the frost to penetrate at least 6-12 inches deep. The reason November snow doesn’t stick around very long, even if it’s cold, is because often there’s some melting from the unfrozen earth.

Past Melting Patterns
I think March 1969 is a good analog month for us to review in order to gauge when the ground will be snow free. The data below is for Worcester. While February that year wasn’t nearly as cold as this year, there was snow on the ground nearly all month. A cold start to March 1969 likely chilled the snow’s temperature to similar levels as we are seeing this year.

You can see a loss of about 5 inches per day around Saint Patrick’s Day with temperatures similar to what we are expecting this week. Of course, the sun is stronger 10 days from now, but it gives a rough idea why I think we will lose 5-10 inches of snow by Friday, with higher amounts disappearing where the snow is already warmer.

March of 1969 also illustrates why I think the ground will be mostly bare on the level, by or during the first week of April. However, notice how long it took those last 5 inches of snow to disappear. The most frustrating part of returning to bare ground is likely going to be the final week before it happens.

Of course, one major rain storm with temperatures in the 60s can speed this entire process up, but with the flood risk quite high, that’s not what any of us should hope for.

Lastly, moving the clocks an hour doesn’t change how fast snow melts. However, if you move your clocks ahead 12 hours you can get the sun to come up at 7PM and then the melting occurs around midnight. Enjoy the day. 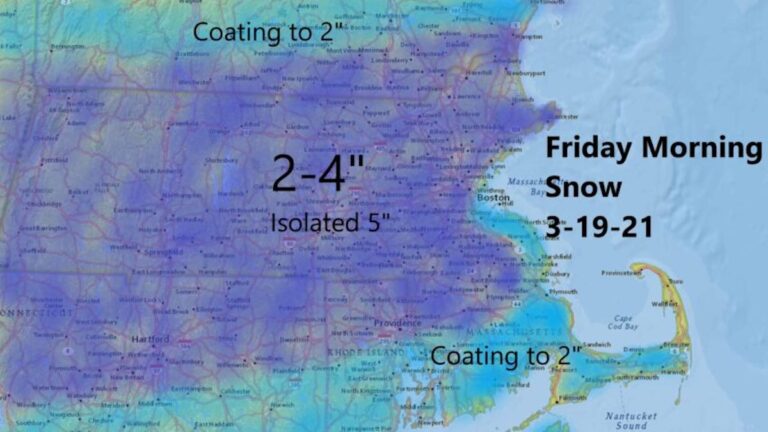