You better enjoy today because it’s going to be a while before we see this kind of warmth again. More snow melted my yard, although I still have a solid foot in most of the front and about 6 to 8 inches of snow in the back. There will be significant snow loss through tomorrow mid-day, before the pace of melting slows to a crawl for much of next week.

There can be areas of showers, especially south of the Massachusetts Turnpike before sunset, but I expect the steadier and heavier rain to hold off until after the evening is over.

Tonight the moon is almost full. I think there will be too many clouds to see it, but there is an eclipse tomorrow morning while the moon is setting. It’s unfortunate we are missing another astronomical event due to weather. It seems like this happens a lot around here.

Moon Driven Holidays
The next week is big for Christians and Jews alike. I always like the Passover-Easter time period. Since both religions use the moon to calculate the holidays, most of the time they fall very close together.

On the Jewish calendar, Passover falls during Nissan or the 7th month. Passover begins on the 15th day of Nissan and ends on the 21st or 22nd depending on how you practice Judaism.. Since Hebrew days begin and end at sundown, Passover begins at sundown on the preceding day or tonight.

For western Christians, Easter is calculated as the first Sunday after the paschal full moon that occurs on or after the vernal equinox. The moon is full tomorrow, Spring already arrived, thus Easter is Sunday. There is some nuance to the date, however. The Western church actually uses a fixed date (March 21) for spring, which in reality floats between the 20th and 21st. And by full moon it does not mean the astronomical full moon but the “ecclesiastical moon,” which is based on tables created by the church. All this allow the date to be set easier.

For the Orthodox Church, Easter is April 12th this year or a week later. The Orthodox Church uses the same formula to calculate Easter, but bases the date on the Julian calendar instead of the calendar that is most widely used today, the Gregorian one. This means both churches only occasionally celebrate Easter on the same day.

Tomorrow is a transitional day. Below is a temperature map for 8AM Saturday. Notice the pocket of mild air over eastern areas, but the cold air (20 degrees colder) is just to our west.

During the day a chilly flow will move through the region and temperatures which will feel mild early will be more winter-like by sunset. Most areas will be just a few degrees above freezing around 7PM tomorrow.

It’s bright and sunny to start Easter. There is another system which will move in Sunday night and early Monday along with some light rain or snow showers through Monday morning. It becomes briefly milder Monday afternoon, but cold and damp or even wet weather resumes much of next week.

As we all know, if you have lived here for a couple of years or more, spring really never arrives, we just sort of go from cold and wet to hot and humid. This might be one of those years.

If you are interested in weather patterns, check out yesterday’s blog about how the cold and snow we had this year is related to the heat and drought in California and other areas of the west. Click here to read the blog. 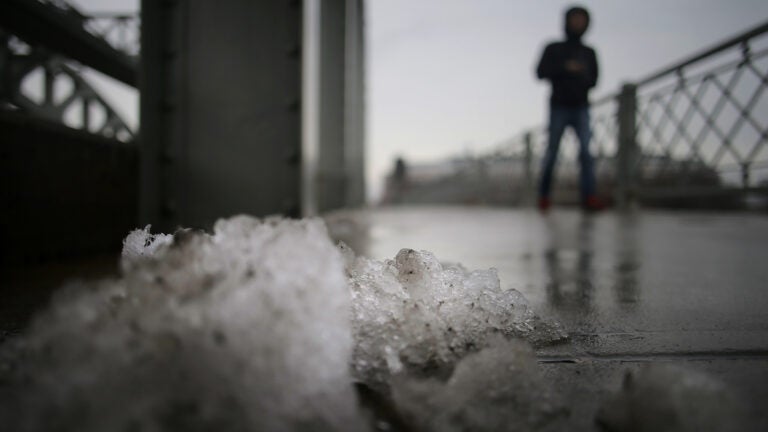 What meteorologists are saying about the storm bringing wintry weather to Mass. on Saturday