Mom got a beach day today with a southwest flow of air and temperatures in many places well into the 80s. Although not official in eastern areas, there were some 90 degree readings in Springfield and central Connecticut making this the hottest day overall this spring. I reached 92 on both thermometers at my house in metro west, I suspect it was pretty close to that reading.

I put on the air conditioning around 4PM after it just became so warm in the house. I hate putting this on so early, but I’ll just say it was too hot for the dogs as an excuse.

The good news is the heat isn’t going to last very long, at least at these levels. The bad news, I don’t see any significant rain this week, even with showers in the forecast.

Many of us will likely see some wetting of the ground between the time period of late tonight and later Tuesday evening. However, I don’t suspect it will be enough rain to really do much to the very dry conditions that now exist. The image below gives one model’s prediction of the upcoming rainfall. Most areas stay under a quarter of an inch.

Tonight will be warm and somewhat humid. It will be highly individual as to whether it’s too warm for you to sleep, but for many it might be uncomfortable much of the night. There could be some isolated showers this evening north of the Turnpike.

Cooler air will be felt over Essex County tomorrow, but as you move south and west it will become increasingly warmer. Mid to upper 80s will be common especially west of Route 128 and Route 495.

There is the risk for showers or even a thunderstorm, but not likely in most areas. Those of you in the coolest of the air have the least likely chance of seeing any thunderstorms tomorrow as the will just be too stable.

The remnants of Ana will pass south of us on Tuesday bringing the chance of some showers, especially over southeastern Massachusetts. A cold front later in the afternoon will bring a chance of showers and thunderstorms to the entire area.

Cooler and drier air returns for the rest of the work week, but the overall pattern remains warm. Both the 6 to 10 day and the 8 to 14 day outlooks, seen below show a virtually lock for overall average temperatures on the warmer side.

Precipitation is forecast to be near normal, which means we should see at least some more consistent rain back in the forecast later this coming weekend or early next week. 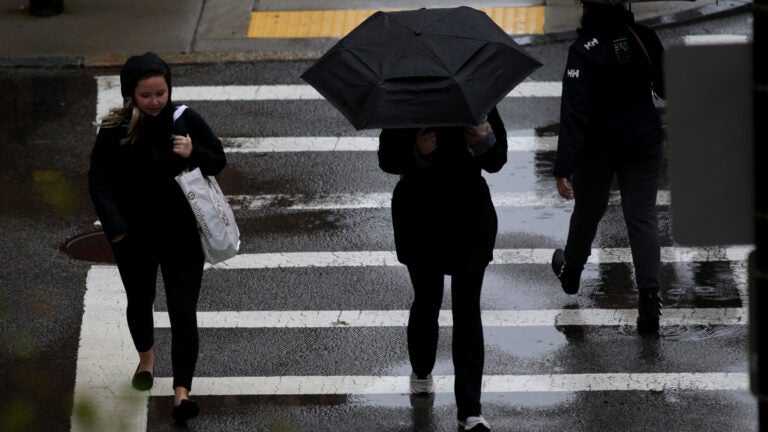