Depending on the time of year, I can usually find some interesting weather to write about. In the winter, it’s of course the cold and the snow, and in summer it’s the heat or a tropical system or even just a line of severe weather.

This morning the most interesting weather is across the Gulf of Mexico where tropical storm Bill became the second named storm of the season. This system isn’t large and doesn’t have strong enough wind to make it a hurricane, but it does contain a lot of moisture in a concentrated area, and it’s poised to hit Texas and Oklahoma.

Wind isn’t often the major player.
The impact of tropical systems is often misunderstood. On the current scales we use to describe tropical systems, a hurricane is considered worse than a tropical storm. However, because wind, not projected rainfall, is used to categorize these weather phenomena, it can give a false impression of the impending damage. Just because a storm has more wind around its core, it doesn’t mean there will be greater overall impact. The media very often oversimplifies these storms by only focusing on the wind.

There are many examples in weather history when a tropical storm has done much more damage than category 1 or even 2 hurricanes.

Several years ago, when tropical storm Irene moved through Vermont, it caused millions and millions of dollars in damage. The wind wasn’t a factor in that storm; it was all the heavy rainfall. Some folks were surprised by the damage from that storm since it wasn’t a hurricane.

Even though hurricane Sandy was officially no longer a hurricane and had lost much of her tropical characteristics upon landfall, it’s another example of a weather system that obviously caused a lot of damage.

Tropical storm Bill
This morning we find tropical storm Bill poised to hit the coast of Texas. This storm will bring copious amounts of rainfall to an area with extremely saturated ground. This combination of wet earth and more rain is going to bring flooding to a region that has seen more than its share of flooding this spring and early summer.

The first map below tells us how much rain has fallen over the past 60 days. Notice the area of eastern and northern Texas on up through Oklahoma, where some areas have received over 30 inches of rain. These numbers have broken records and left the ground unable to hold any more moisture and put rivers at very high levels.

Now let’s look at how much rainfall tropical storm Bill will bring to the same area. Unfortunately these same waterlogged areas are about to get even more rain. In some cases there could be another 5-10 inches of rainfall through Thursday. All of this rain is going to exacerbate the problem further and likely make weather the lead story on all the local and even national newscasts in the coming day or two.

Much less rain here:
The final map I will show this morning is one indicating projected rainfall for the Northeast through Thursday. Notice, while there is some more rain on the way, it’s not very much. We have the chance of showers this afternoon and again on Thursday with a nearly flawless day tomorrow. Sunshine on Wednesday will dry out the air, and with temperatures in the 70s, it will be perfect for nearly all outdoor activities.

Upcoming weekend:
I am excited about the weather for Saturday (and Friday) as it will be sunny and pleasantly warm. Sunday, there is a chance of showers, but much of this depends on what Bill does after it is no longer a tropical system and gets caught up in the Jet Stream. I’ll be updating the forecast here and on Twitter @growingwisdom, please follow me there. 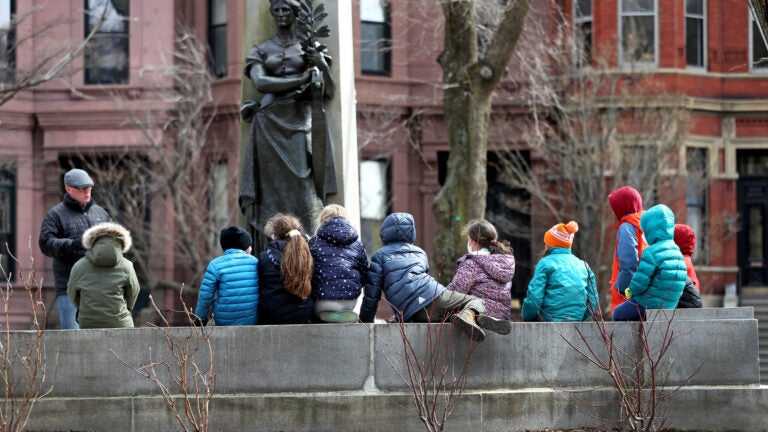 Colder weather has arrived. David Epstein on what to expect ahead, including some snowflakes.