5:50 Update
Storms are moving eastward this evening. The radar estimate shows them continuing through the evening, but the strongest should remain west of Boston. Keep an eye to the sky and take shelter if severe weather approaches. The watch is posted until 11PM for areas west of the city.

Yesterday was another day in which Boston averaged slightly under the 30 year average for its high temperature. There is heat across the country, but not excessive amounts of it. The very northern edge of the heat will brush southern and central New England today and tomorrow, but cooler, drier and more refreshing air is coming for the middle and later part of this week.

Not A Hot Summer
I’ve written considerably about the comparatively cool summer we are having and likely will continue to have the next several weeks. The reasons for this are due to cooler than average ocean waters in the north Atlantic, warmer than average waters off the northern west coast and the strength of the oncoming El Nino.

Although we have two days of heat on the way, it’s not going to last. The humidity, which is very oppressive today, will continue at high levels through much of Monday, before trending lower Tuesday and especially on Wednesday. Thereafter, the rest of the week looks cooler and drier.

The ever elusive 90 degree reading may occur this afternoon in Boston and if it doesn’t we’ll have another chance tomorrow. We are now in fifth place for the latest occurrence of a 90 degree day in Boston since the late 1800s.

There is risk for thunderstorms this afternoon, especially north and west of the Massachusetts Turnpike. As a piece of energy comes through the upper levels of the atmosphere, it will help to lift the warm and humid air and form these storms.

Some of the storms could become strong to even severe, but this isn’t, as usual, written in stone. As I have written multiple times, summertime thunderstorms are not always a sure bet and are often added to the forecast because the atmosphere is primed to produce them.

The primary threat from any strong to severe storms will be wind and heavy rain. With so much moisture in the air these storms will have rainfall rates of 3 inches per hour or more and this can briefly, but quickly create street flooding.

The storms will slowly start forming further south during the evening. This means Boston and points west and southwest will also get into the action. If you have evening plans, I would definitely have a back-up to get inside if you need to.

The radar image below shows how the storms are expected to form this afternoon and evening. Don’t focus on the exact placement of the storm, rather watch the trend of them moving west to east and also south as time progresses. If you are reading this from southern New Hampshire or northern Massachusetts you will see the storms much earlier in the afternoon.

Although tomorrow turns drier it remains very warm to hot. As I wrote earlier, this won’t last. The image below is from the GFS model for the next 10 days. Again, don’t focus on the exact numbers, rather look at the trend. Notice how temperatures are forecast to go down later this week before we see a moderating trend for the final full weekend of July.

The summer of 2015 is definitely shaping up to be one where any heat we do see is rather transient in nature and quickly followed by cooler and drier Canadian air after a few days. If you aren’t a fan of the heat, this is turning into a great summer. 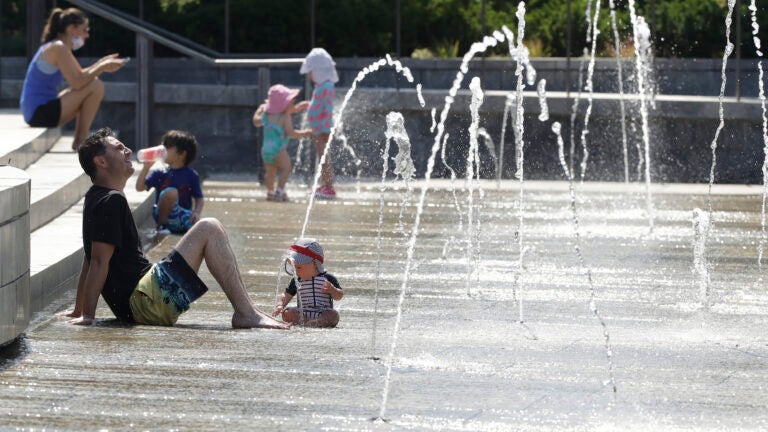