Every August brings about the Perseid Meteor shower. This annual event is anticipated by many folks because of the reliability of the meteors and the fact they occur when it’s warm and comfortable to be outside deep into the night. By contrast, the Geminids in mid-December might have more meteors per hour, but it’s often cold and cloudy.

Headlines around the meteor showers give the false impression these events occur only on a night or two. Most meteor showers build to a peak and then slowly fall back in terms of the number of meteors you can see. This year the peak of the Perseids occurs in the early morning hours of Thursday, August 13, but there will be some meteors every night through roughly the 26th of the month.

Whenever the weather has been good for the Perseids I have often taken groups of kids to watch them. While I was working at overnight camp, bringing campers to the upper ball field where we had a good view of the northeastern sky was always a treat. We would go from about 9:30 p.m. to 11 p.m., depending on the age of the kids, and we were always guaranteed several meteors.

I’d have the kids bring blankets, so they could comfortably look up at the night sky. It’s a memorable part of summer and something that allows anyone of any age to really appreciate the vastness of space. It’s really that simple, just lay down and look up and have a view of the northeastern sky if possible.

Taking pictures of meteors is possible, and rather than explain it here I will defer to the experts at the Meteor Society.

What’s a meteor shower?
There is a connection to this meteor shower here in New England, specifically at Harvard. Back in 1862, Astronomer Horace P. Tuttle discovered Comet Swift-Tuttle at the Harvard College Observatory. It’s the tail debris of this comet the Earth is passing through and the little pieces of debris, not much bigger than a grain of sand, burn up as they pass through our atmosphere. These bits are moving fast, nearly 130,000 miles per hour (210,000 kilometers) lighting up the night sky.

Won’t moonlight interfere?
This year, for the first time since 2007, the moon is in the “new” phase, meaning its light is basically non-existent. This is good news because light pollution is the bane of sky watchers all across the globe.

The map below shows where light pollution is concentrated. You can often find an area that is dark enough to view them. Be sure to allow your eyes to adjust to the darkness which can take up to 20 minutes.

I’ll be watching for them this evening and would love to hear from you on Twitter @growingwisdom. Sky conditions should improve overnight, and I expect much of New England to see enough of the sky to be able to get a good view. The maps below show predicted cloud cover in the pre-dawn hours of Thursday.

Find Me On Twitter
Follow @growingwisdom
Recommendations
Beaches, ballfields, parks, open hills, etc. are great places to view the meteors. Just remember to be safe, and don’t break and laws trying to find a dark space. Have fun and good luck! 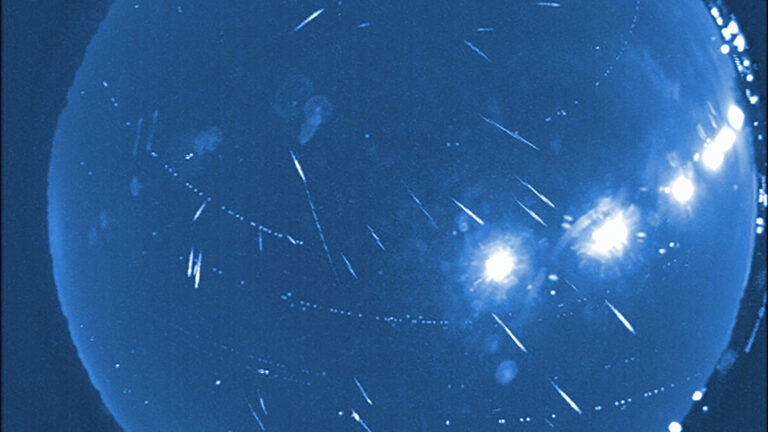