I have a morning routine when it comes to the computer models. Depending on the time of year, I look at certain long range maps first, and then look at the more immediate forecast. The exception to this rule is if there is a snowstorm, then it’s right to the maps which will help me forecast that scenario.

In the summer, I review the dew point and temperature maps. I dislike extreme heat and humidity and I like knowing when that stuff is arriving or leaving. In the fall, I look at the low temperature maps as I don’t want an early frost or freeze before I am done in the garden and my houseplants are back inside.

Lately, I’ve been looking at the total precipitation maps for the next 10 day period. Each time I look, there isn’t any rain in the forecast or if there is rain predicted it disappears the following day. With the weekend beginning tomorrow, I definitely want it to be nice so I can work outside, in spite of desperately needing rain.

Back in 1947, early October began a stretch of dry weather lasting the entire month and in 1924, a dry October continued through mid-November. The point is, this time of year can bring some of the driest conditions we experience in 12 month period, it’s likely why we often think of September and October as having some of the best weather of the year.

The map below is from one the climate models and shows no rain through the end of the month. This means a dry and sunny weekend ahead and into the middle of next week.
Temperatures will be on the cool side of average this weekend, but with the September sunshine it won’t feel chilly. If you are headed out apple picking, playing in a soccer game or just walking the beach, I am confident you’ll be commenting on just how stunning the weather is.

I expect high temperatures to the be in the upper 60s for most areas this weekend, with some middle 60s along the coast as winds come from the east and bring cool ocean air along the coastline.

The next map shows rainfall into the first few days of October and now we see southern New England forecast to receive some rain. I am not getting my hopes up this map is going to turn out valid. I’ve seen this story before in the past few weeks and it hasn’t rained. We’ll have to wait until later next week to know if the weather turns more unsettled as we start October.

The European model keeps us dry and doesn’t allow any rain to reach New England at least until after October 4th. If the weather is going to be this dry and sunny we might as well enjoy it. Many local orchards are open for picking this weekend and if you want the best variety of apples, peaches and Asian pears, be sure to go early. If you wait until Columbus Day weekend, some fruit trees may already be picked clear. 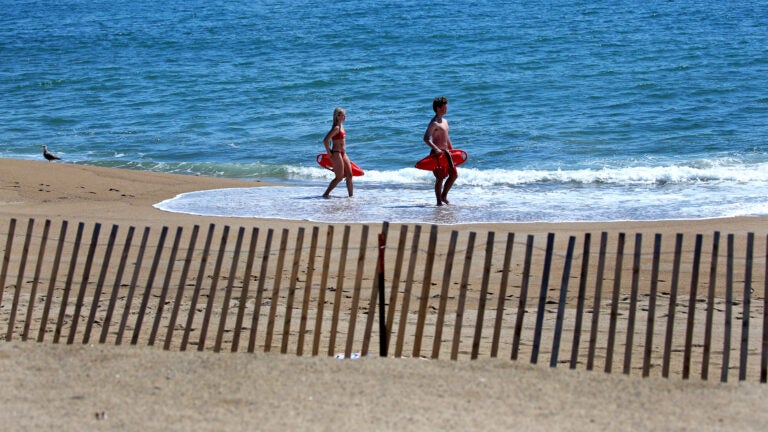