Another nice morning across the region brings sunshine and seasonable temperatures. We will enjoy another day of 60 degree-plus air, but changes are coming.

Cold snaps in October can create a lot of headlines; your cell phone might even put a snowflake on the 10 day forecast. This is the time of year, you have to dig just a bit deeper in order to get an accurate forecast picture. Until smart phone weather apps get smarter, you need to do more than just look a raindrop or snowflake if you want a detailed and accurate forecast. These things all make all make great topics to discuss, but it’s the location, volume and degree of each is what’s really important.

Is It Going To Snow This Weekend?
Let me get the snow out of the way this morning. It’s not going to snow this week or this weekend where you likely live. Now in all fairness, I might have a few readers in the northern most areas of Maine, southern Canada or the higher elevations of northern New England and those areas could see snow. This is completely typical for mid-October. Could a flurry fall in Fitchburg, sure, but unlikely.

The GFS model has gone bonkers in the Allagash region of Maine with over 6 inches of snow, this isn’t impossible, but snow amounts early this weekend should be much less. The ground is still warm and temperatures are marginal for the snow to stick. (image: Courtesy WeatherBell.com)

The probability forecast for snow over 1 inch shows the highest probability in northern Maine and Canada, but most areas are below 50 percent chance of the snow.

Cold
It is going to be cold this weekend, especially Sunday and into Monday morning. Saturday may feel colder with the wind, more on this coming up. Nearly all areas will stay under 50 degrees Sunday. This is very much under average and if this does occur will put this Sunday into the record books as one of the coldest October 18ths recorded. If you look at every October 18 since the mid-1870s, there are very few where the temperature in Boston didn’t reach 50 degrees.

The chill arrives Friday night, but before it does, we are still in the 60s today and tomorrow. Clouds and a few showers Friday mark the beginning of the change.

Head of the Charles
There is a big regatta race this weekend and spectators will want to dress for a Thanksgiving regatta, not a mid-October one. Not having ever rowed one of those boats, I can’t tell you what sort of outerwear the crew teams should be wearing, but it needs to be warm.

Wind
A series of cold fronts or pieces of energy will be dropping in for a visit from Canada over the next few days. The final push of cold air comes on a strong northwesterly wind. Winds could gust over 30 miles per hour this Saturday into early Sunday and that is strong enough to strip some foliage and even bring some tree damage. Scattered power outages are always possible on these windy days.

Warm air returns
Monday is still quite cold, especially in the morning. If Sunday morning doesn’t kill your tender plants, Monday certainly will. By the middle of next week a return of southwesterly winds brings back seasonable air. Temperatures may reach back into the 60s again. (image: Courtesy WeatherBell.com) 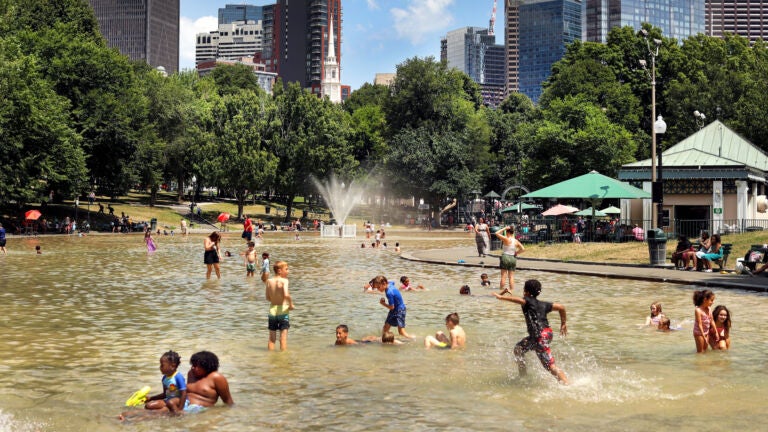