The 2015 hurricane season is officially over, and while it was another unusually quiet season in the Atlantic, it wasn’t quiet overall. Although New England once again escaped a direct hit from a hurricane or tropical storm, our luck will only last so long.

Cyclone Energy
The word “cyclone” can be misunderstood. In The Wizard of Oz, Dorothy uses the word cyclone to describe a tornado, the funnel-like wind storm that occurs in thunderstorms. However, the word measures something called the Accumulated Cyclone Energy or ACE index, which is a way to codify how much energy the tropical storms. In 2015, the total energy from all storms in the Northern hemisphere has been above average, which is noted below in red. In contrast, the Atlantic hurricane season has been very quiet, which is noted below in green. You can see how the areas are divided and who had a more active year.

Active Pacific
The Pacific Ocean was very active and broke some records as well. We saw some storms reach super typhoon strength (typhoon is just another name for a hurricane), and other storms impact areas normally not in their path. The two maps below show the track these Pacific storms took this season. You’ll be able to compare this to the same for the Atlantic.

Quiet Atlantic
Nature has a funny way of keeping these in balance. We don’t typically see an active Pacific hurricane season and an active Atlantic one in the same season. This year, several factors contributed to the quiet Atlantic season, most notably the beginning stages of El Nino. Typically, El Nino years are not very active in this part of the globe when it comes to hurricanes because El Nino helps to create a strong upper level wind that tends to blow apart hurricanes.

New England Storms
Hurricanes in New England are actively relatively rare. From 1900 until today, there have only been nine hurricanes to make landfall in New England, the last being Bob in 1991. Yes, Irene did impact the region in a big way back in 2011, but only at tropical storm strength — not that of a hurricane.

The image below from Blue Hills Observatory shows the tracks of storms to impact New England.

You’ll notice nearly all the storms make a push toward the East Coast, then turn northward toward New England. This curve is the result of the summertime semi-permanent pressure pattern in the Atlantic. It’s been 25 years since we had a hurricane reach the shores of Connecticut, Rhode Island or Massachusetts, Statistically, this is a very large gap.

Hurricane Season 2016
While this year’s season is just ending, already there are strong indications of a much more active season next year. There is enormous consensus our El Nino of this fall will become a La Nina of next winter.

This dramatic shift in ocean temperatures off the coast of South America will have ramifications during the upcoming summer and into the next hurricane season. While I can’t predict if a storm will reach New England, I do feel comfortable saying our threat level will be much higher in the upcoming year than it was this one.

You can follow my thoughts on the upcoming winter and next year’s hurricane season on Twitter @growingwisdom. 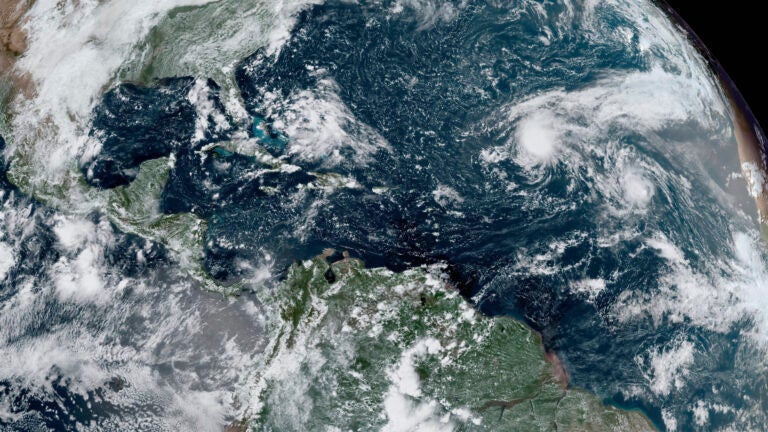