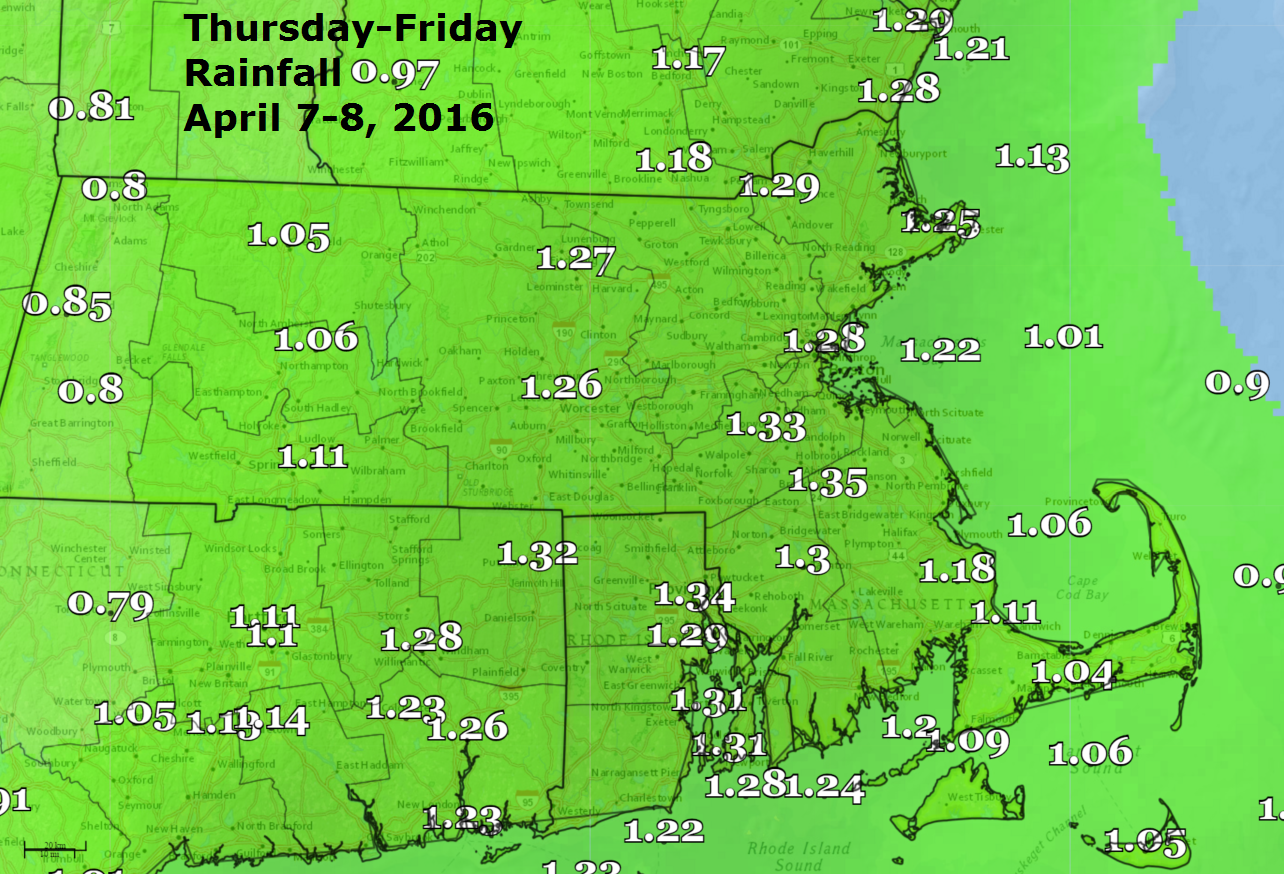 There’s been nothing boring about the weather lately and it’s going to continue to be very active around here over the next 10 days.

We not only have significant rain coming, but I am still focused on the possibility of more snow this weekend, especially south of Boston.

On Wednesday evening, a few showers or even sleet pellets could fall as milder air moves northward. This isn’t directly part of the rain system for Thursday.

On Thursday, a strong low pressure center or storm will move into the Saint Lawrence River Valley to our west. The track will feed milder and moist air northward. There’s enough energy with this system to produce some heavier downpours and perhaps an isolated thunderstorm.

The heavier rain is going to arrive either during or just after Thursday’s evening commute, but there will be sporadic showers happening during the day. The image below represents the predicted radar for 6 p.m Thursday. The warmer colors are heavier rain, and the red and orange areas can often represent thunderstorms. 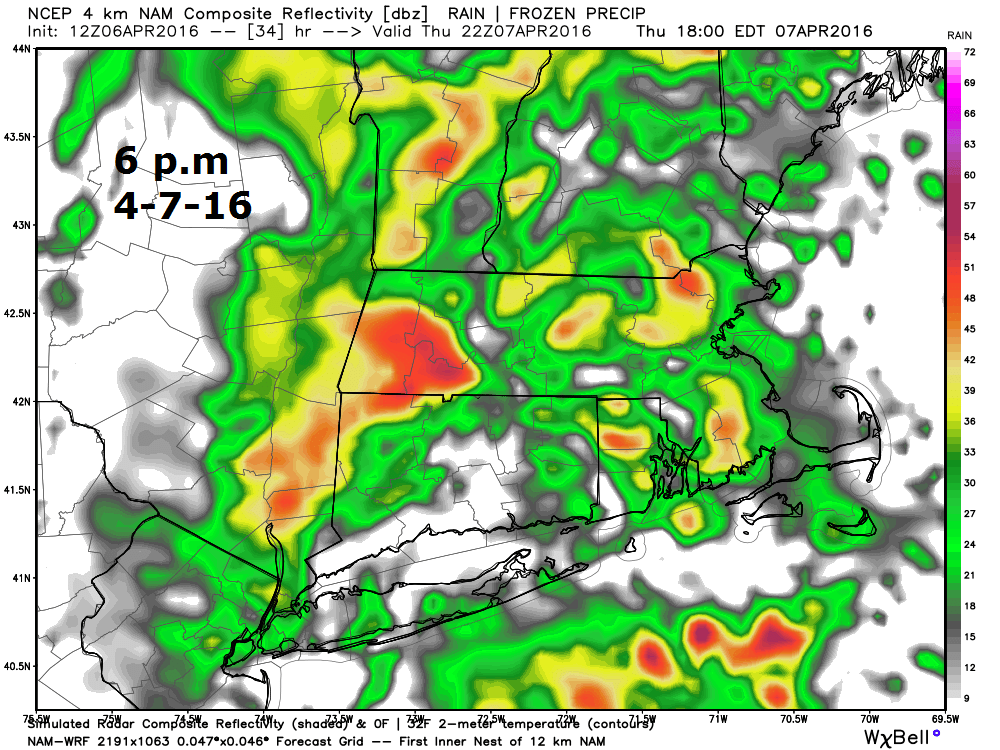 Since this map is just a moment in time, it’s important to not focus on the exact placement of the rain; rather the fact the coverage is very widespread.

We are not going to see widespread flooding rains from this system, but we could see some street and, perhaps, small stream flooding in a few areas. I am expecting most areas to see around an inch of rainfall, enough to slow things down for sure, but not cause major issues.

Temperatures will run well into the 50s Thursday, melting all but the largest of snowbanks. Winds will be gusty, but not excessively strong. There’s always the chance for power outages, but I’m not expecting it to be a problem for virtually all of us.

Friday brings an end to the showers and partial clearing. Colder air moves in during the afternoon and overnight setting the stage for a cold weekend.

The concern for the weekend is a storm system moving from the Ohio Valley to the mid-Atlantic coastline and then out to sea. This storm will bring a 50- to 100-mile-wide swath of snow from Illinois to New Jersey. The dilemma is the storm may come close enough to provide more April snow to parts of southern New England. It’s entirely plausible some areas, especially south of the Mass. Pike, will see snow Saturday night into early Sunday. While not a big storm, even a one- to three-inch snowfall would be upsetting to many of us and not something I certainly want to see. 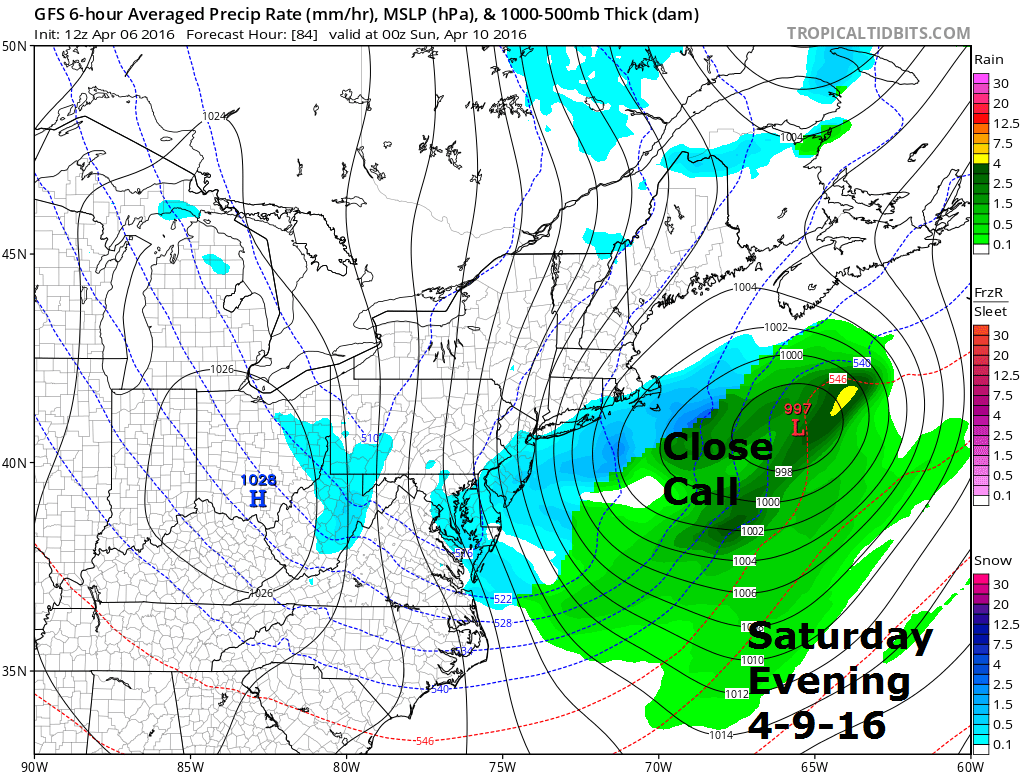 If you are wondering when the pattern might take on a warmer look, it could be that we need to wait another two weeks or so before consistently mild air arrives, so pack your patience. What started as an early spring is quickly looking much more typical with all the frustrations New Englanders have come to expect.

Snow (yes, you read that right) is on the way for some parts of Mass.