Marathon Monday will begin cool for the runners, but quickly warm. If a sea breeze never materializes, then from about 11 a.m onward, temperatures will be between 65 and 72, quite warm for running, but nearly ideal for spectating.

High pressure will remain in control through the entire day and grace all of southern New England will blue skies and abundant sunshine. Temperatures will quickly rise this morning through the 50s and into the 60s. The warmest part of the day in Boston will be before 1 p.m when temperatures reach or exceed 60 degrees on the Brookline/Boston line. After that time, a cooling sea breeze will push temperatures back into the 50s.

A cold front with marine air on the other side of it will make its way south Monday night and Tuesday, bringing colder air and returning temperatures to seasonable levels from above average ones. While there will be a frontal passage, it will likely come with not anything more than clouds.

The spell of dry weather will resume next week with the next chance of significant rain perhaps until as long as 10 days from now. That’s about the time I’ll start getting nervous about the prospects for summer drought.

The jet stream is stuck, and this time it’s good for us

Stunning stretch of blue sky as far as I can see, that’s my forecast for the next several days and beyond. We are locked in a blocking pattern where the weather gods are smiling down on New England. The jet stream is stuck in a position such that storms will not be able to penetrate into the area and therefore sunshine, and eventually a few days of warm weather, are in the offing.

Meteorologists call the present jet stream configuration an omega block. This blocking pattern takes on the shape of the Greek letter omega: Ω. This is depicted in the image below. 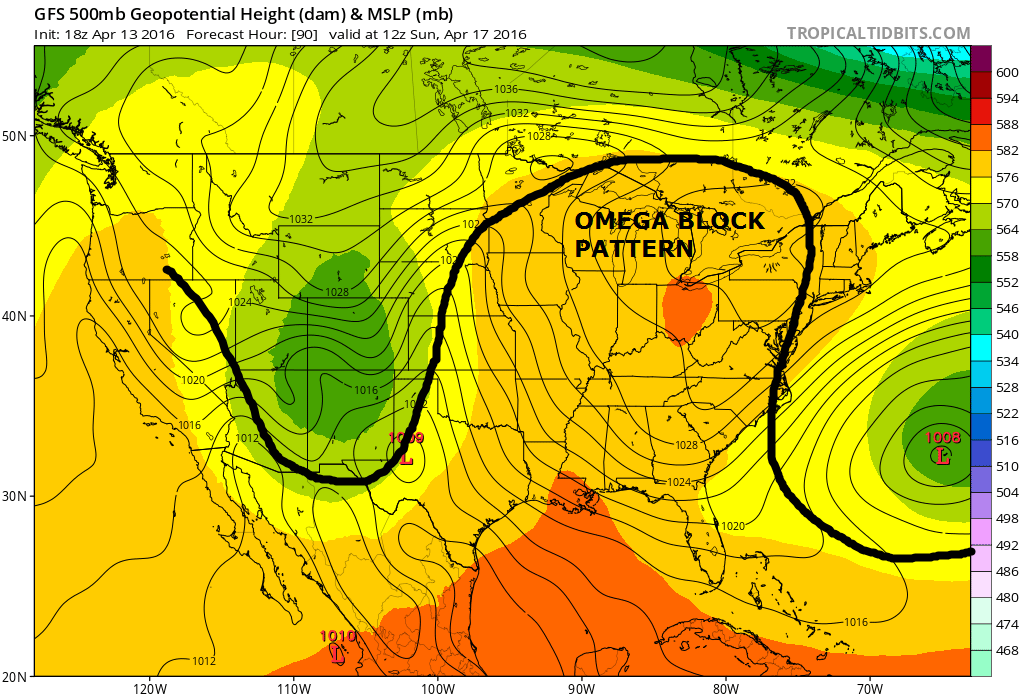 It’s not always sunshine and tranquil weather in these blocks. The block has three parts, low pressure, then high, then low again. If New England were influenced more by the low pressure sides, then we’d have clouds and precipitation.

Check out the forecast for the next five days. How often do we see so many days of sunshine in April?

Now look at what’s going on in parts of Colorado, they are under the influence of the omega block as well, but the inclement side of it.

Spring is typically when these stuck jet streams set up. The atmosphere is in deep transition from its winter mode to summer. In the readjustment, things can get stuck.

While the block is slow to move, it’s not in the exact same position every day. There will be some changes heading into the weekend and early next week.

50 years later: She fell nearly 2 miles from a plane and hiked out of the rainforest to survive