It’s hard to believe that it’s only Jan. 2 and we’ve already experienced a depth of cold this winter not seen in a century.

Now fast forward to Thursday, when we’re expected to get a fairly high impact snowstorm.

A low pressure area will bring us wind, snow, and rain over Cape Cod. Storms undergo intensification all the time, but the speed at which they do so varies. This particular storm is going to intensify about as fast as any storm in this part of the world can during this time of year. Meteorologists call this rapid intensification “bombogenesis.” Because of the size and strength of the storm, a wobble of 50 miles east or west will change the forecast dramatically. That’s why you’ll likely see a very wide range in predicted snowfall totals.

Snow
Snow will begin in the Boston area in the early morning hours on Thursday and continue into the evening hours before coming to an end sometime between 7 p.m. and midnight. I expect many schools to close Thursday due to the timing of the storm.

Presently I’m forecasting that Boston will receive 8 to 12 inches of snow, but that upper limit will increase significantly if the storm moves farther west.

I’m also estimating 8 to 12 inches of snow for New Hampshire’s coastal plain down through Rhode Island.

The snow will be heavier and wetter toward southeastern Massachusetts and the Cape Cod Canal. In those locations, amounts will be in the 4- to 8-inch range.

Farther out on the Cape, there’s a better chance that much of this will fall in the form of rain, so I have lowered snowfall amounts dramatically there. Remember, if the storm track changes significantly, these amounts will also follow. 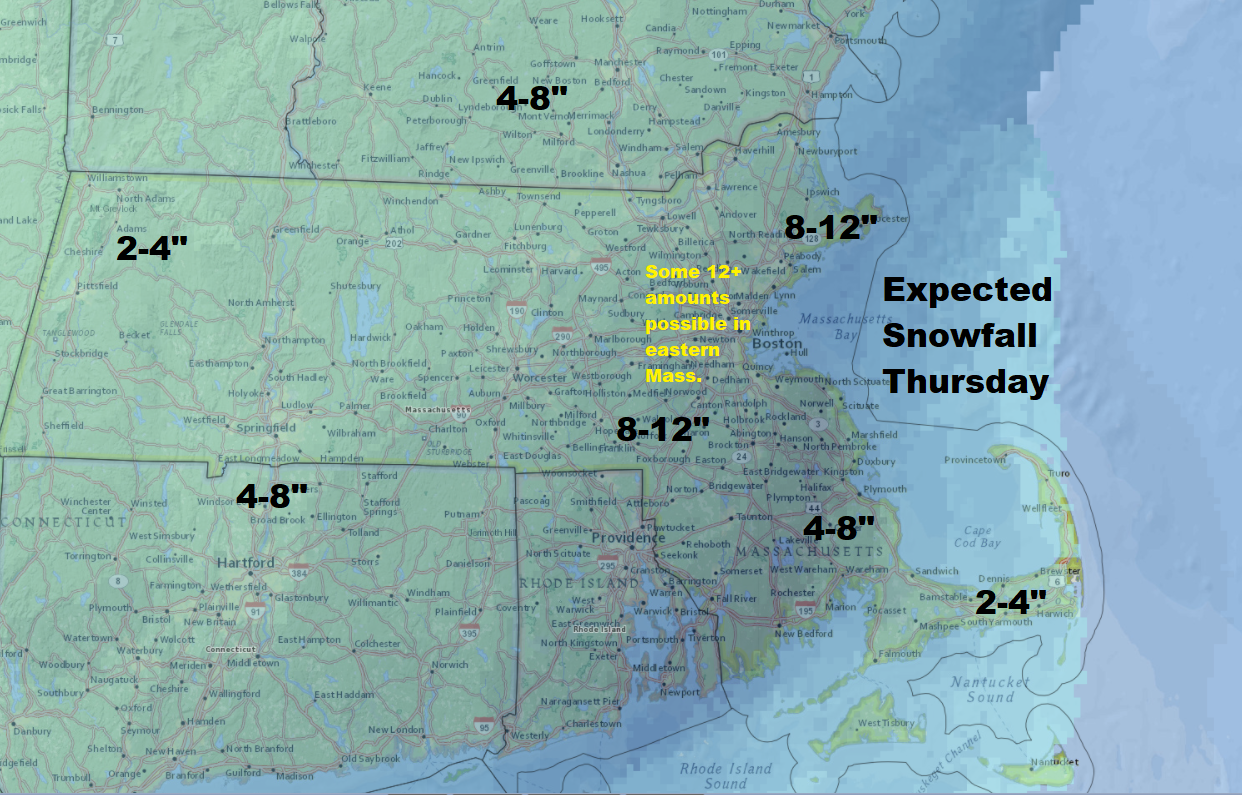 Winds
Winds will gust at more than 30 miles per hour over inland areas and at more than 40 miles per hour along the coast, including in Boston. Over Cape Cod and the islands, we could see gusts at more than 60 miles an hour. Winds of that speed can themselves create power issues. Additionally, trees are very brittle from the recent cold and may therefore be more susceptible to damage.

The snow will be very light and fluffy in most places and whip around into drifts. The wind will also create very low visibility at times, along with potential near-blizzard conditions at the coast. 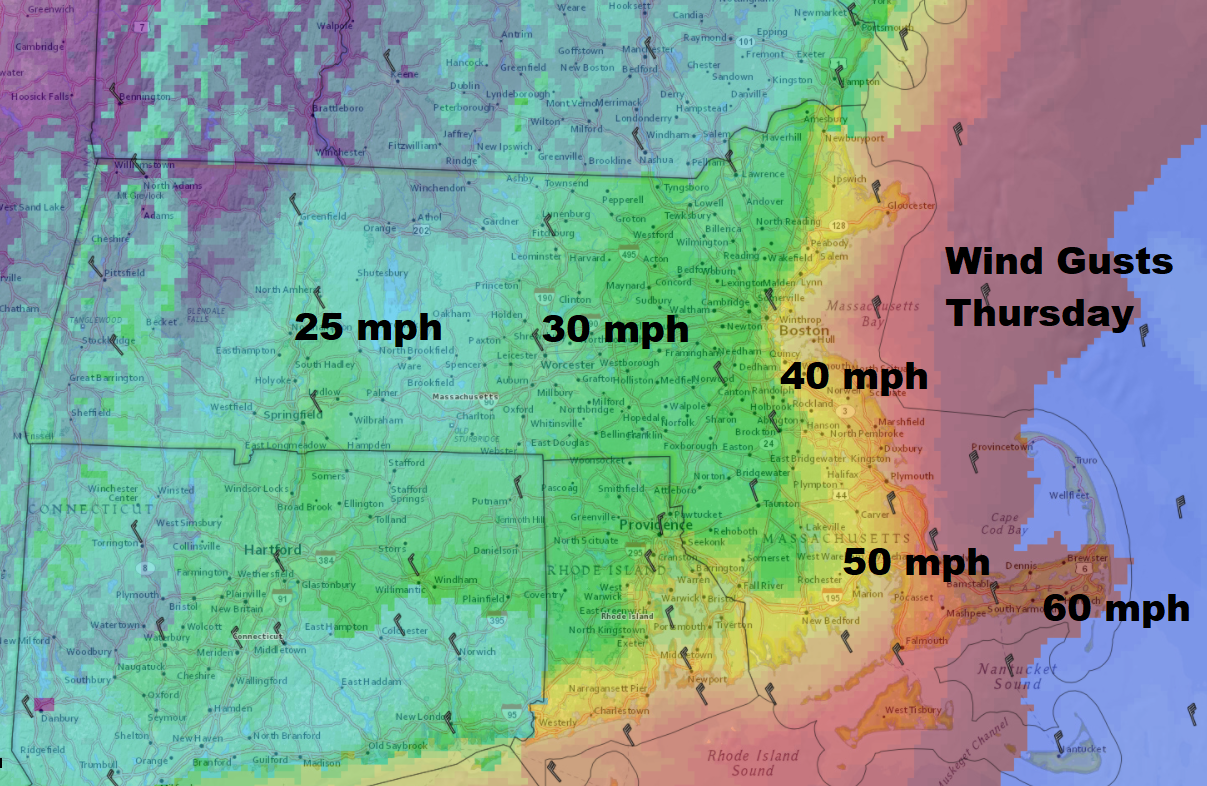 Coastal flooding
The tides this week are astronomically high. Adding in a coastal storm will bring minor to  perhaps moderate coastal flooding. The storm is moving quite quickly, so we will not go through multiple high tide cycles under the storm’s influence.

I do expect some shore roads to be closed, with the potential for some minor damage. A 2- to 3-foot storm surge is likely.

The worst impact would occur if the storm’s influence is greatest during high tide. You can see on the charts below that high flooding isn’t expected during the storm, but these predictions can also change as the track of the storm becomes more definitive. 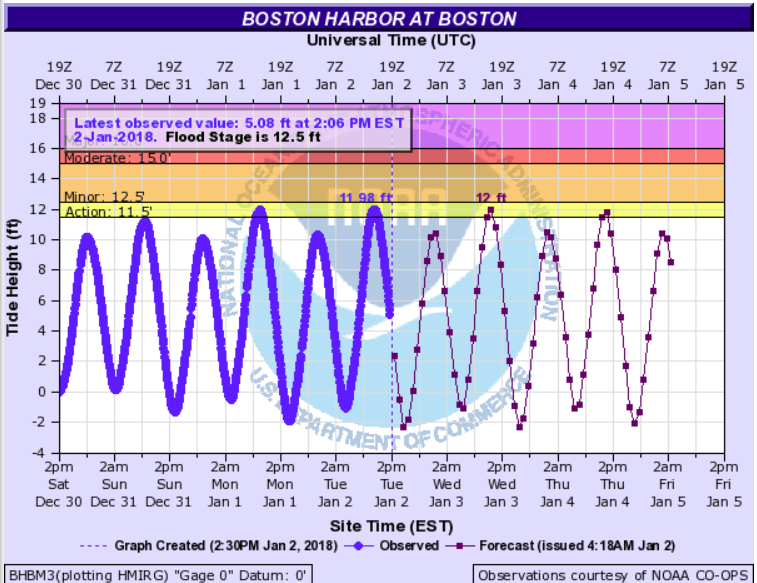 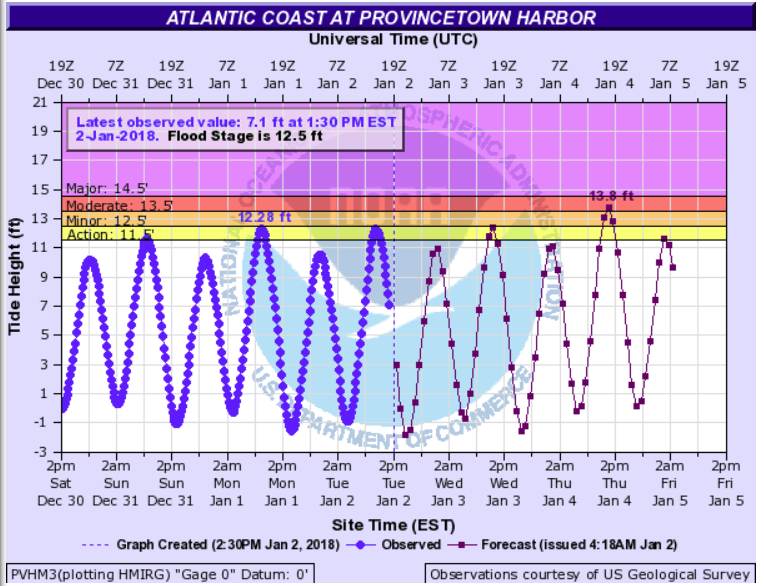 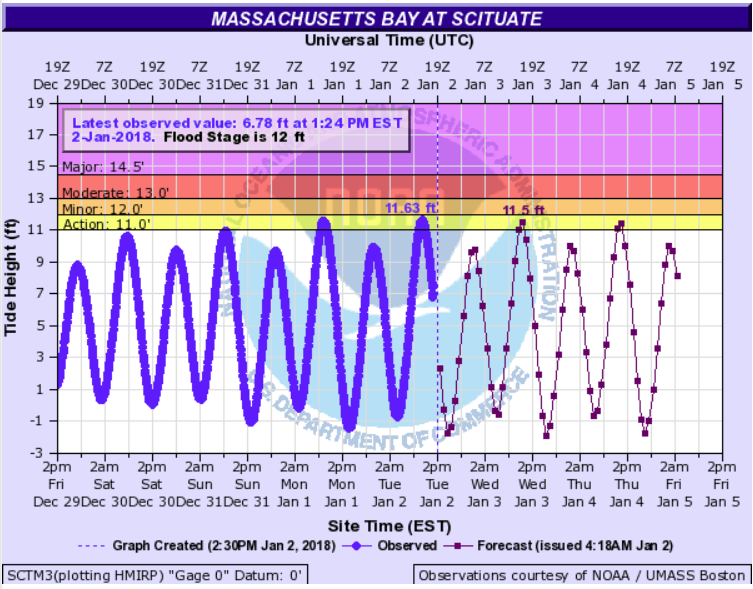 Cold
It’s never really too cold to snow, but the temperatures will rise during this upcoming storm. Once the storm departs on Friday, another very cold Arctic air mass will move into New England. This will likely be the coldest air of the entire season. It doesn’t mean that it won’t be cold again; it’s just that, when we look back at the entire winter, I’m thinking Saturday and Sunday morning will stand out as the coldest days.

Along with the cold will come the risk of damage if you lose power. It would not take many hours for pipes to freeze and eventually burst. The risk is especially high for unoccupied summer residences whose owners keep their places just warm enough over the winter to prevent water damage and depend on electricity to do so. 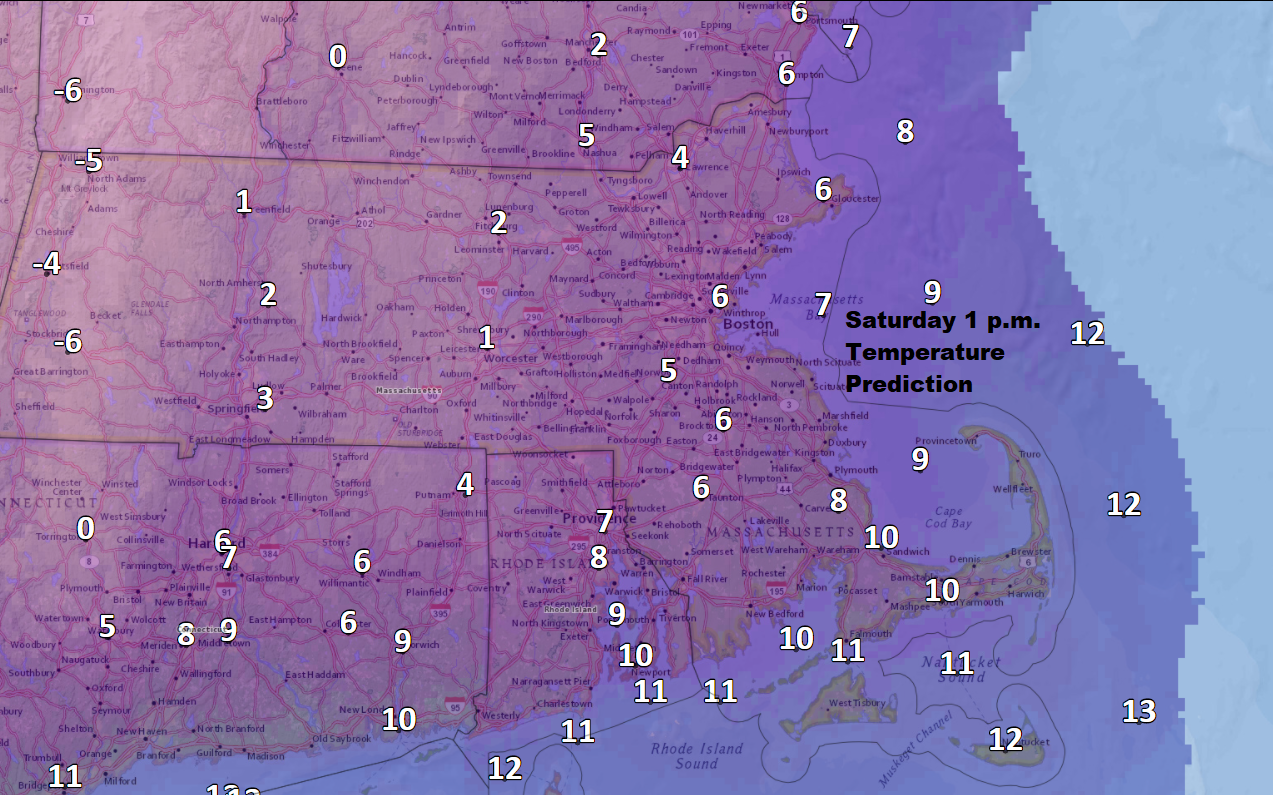 A break in all of this
On Monday, temperatures will reach or even exceed the 32-degree mark, and this will give us a chance to thaw out a little bit. There is more cold on the way, but I’m expecting a more significant January thaw at some point during the middle of the month. 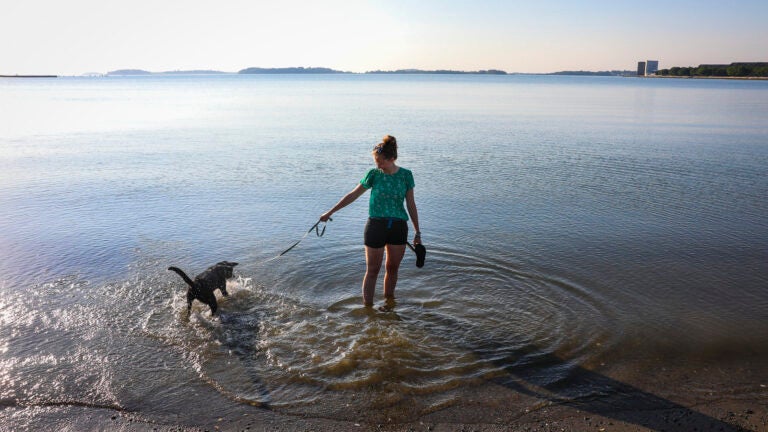