PANAMA CITY, Fla. (AP) — Gaining frightening fury overnight, Hurricane Michael closed in Wednesday on the Florida Panhandle with potentially catastrophic winds of 145 mph, the most powerful storm on record ever to menace the stretch of fishing villages, military bases and spring-break beaches.

With more than 375,000 people up and down the Gulf Coast warned to clear out, the hurricane’s leading edge began lashing the shoreline with tropical storm-force winds, rain and rising seas before daybreak, hours before Michael’s center was expected to blow ashore.

The unexpected brute quickly sprang from a weekend tropical depression, reaching Category 4 early Wednesday as it drew energy from the Gulf’s 84-degree waters. That was up from a Category 2 on Tuesday afternoon.

‘‘The time to evacuate has come and gone … SEEK REFUGE IMMEDIATELY,’’ Florida Gov. Rick Scott tweeted, while the sheriff in Panama City’s Bay County issued a shelter-in-place order before dawn. 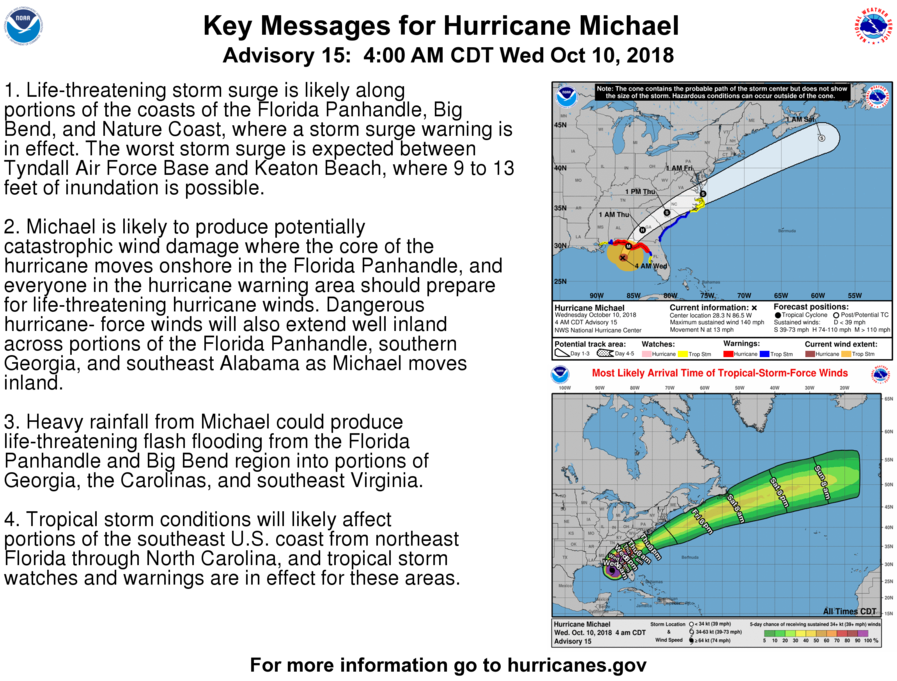 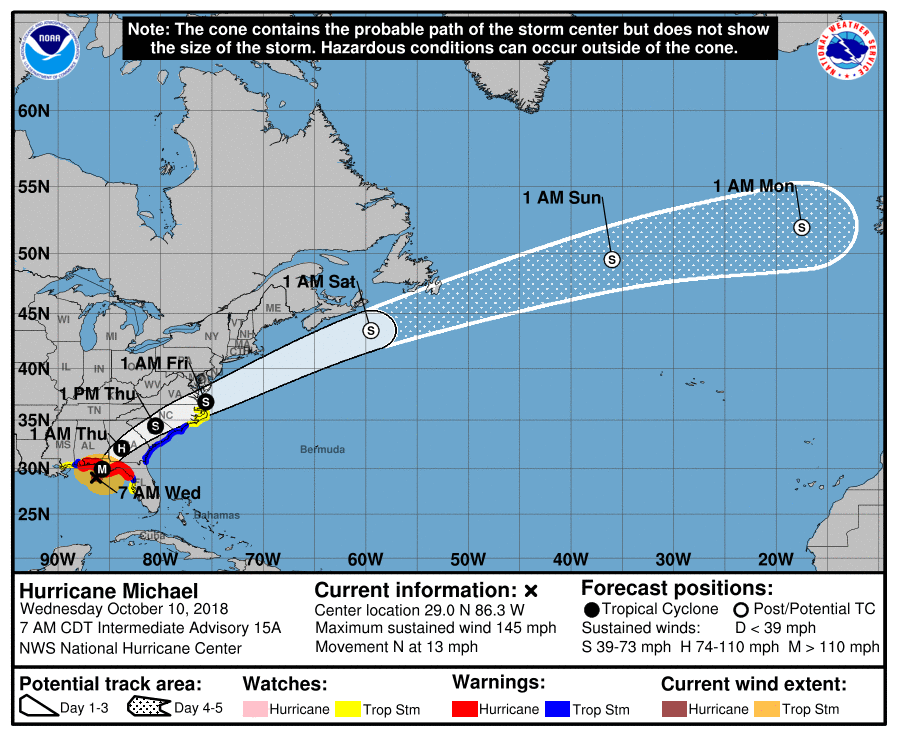 At 8 a.m., Michael was centered was about 90 miles (145 kilometers) from Panama City and Apalachicola, moving fast at 13 mph (21 kph). Tropical storm winds extended 185 miles (295 kilometers) from the center, and hurricane-force winds reached out 45 miles (75 kilometers).

The storm appeared to be so powerful — with a central pressure dropping to 933 millibars — that it is expected to remain a hurricane as it moves over Georgia early Thursday. Forecasters said it will unleash damaging winds and rain all the way into the Carolinas, which are still recovering from Hurricane Florence’s epic flooding.

‘‘We are in new territory,’’ National Hurricane Center Meteorologist Dennis Feltgen wrote on Facebook. ‘‘The historical record, going back to 1851, finds no Category 4 hurricane ever hitting the Florida panhandle.’’

Rainfall could reach up to a foot (30 centimeters), and the life-threatening storm surge could swell to 14 feet (4 meters). 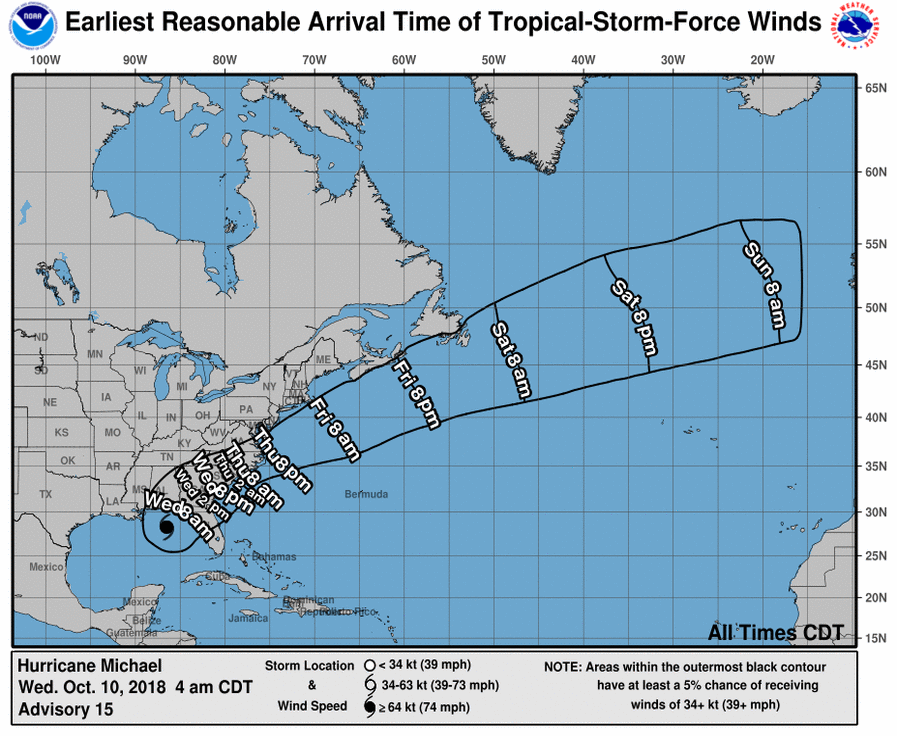 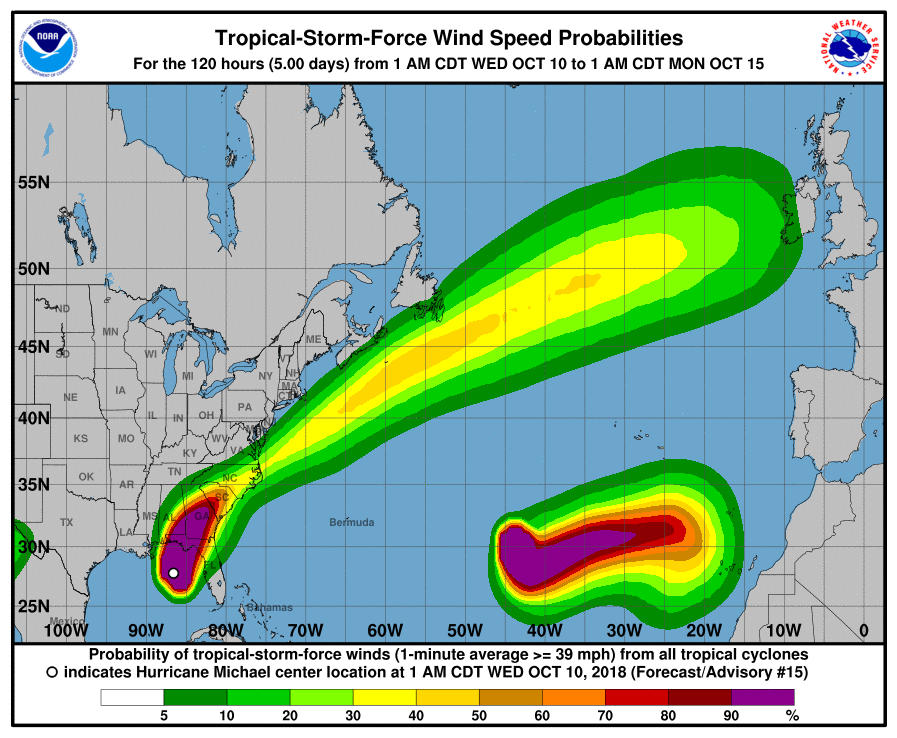 Several hours ahead of landfall, seawater was already lapping over the docks at Massalina Bayou near downtown Panama City, and knee-deep water was rising against buildings in St. Marks, which sits on an inlet south of Tallahassee.

Many evacuees sought shelter in the capital city, which is about 25 miles from the coast but is covered by live oak and pine trees that can fall and cause power outages even in smaller storms.

Only a skeleton staff remained at Tyndall Air Force Base, situated on a peninsula just south of Panama City. The home of the 325th Fighter Wing and some 600 military families appeared squarely targeted for the worst of the storm’s fury, and leaders declared ‘‘HURCON 1’’ status, ordering out all but essential personnel.

The base’s aircraft, which include F-22 Raptors, were flown hundreds of miles away as a precaution.

Evacuations spanned 22 counties from the Florida Panhandle into north-central Florida. But civilians don’t have to follow orders, and authorities feared many failed to heed their calls to get out.

‘‘We’ve been through this before,’’ said Sally Crown, who planned to hunker down with her two dogs in the dangerously exposed coastal town of Apalachicola, population 2,500. ‘‘This might be really bad and serious. But in my experience, it’s always blown way out of proportion.’’

Meteorologists watched in real time as a new government satellite showed the hurricane’s eye tightening, surrounded by lightning that lit it up ‘‘like a Christmas tree.’’

‘‘I guess it’s the worst-case scenario. I don’t think anyone would have experienced this in the Panhandle,’’ meteorologist Ryan Maue of weathermodels.com said. ‘‘This is going to have structure-damaging winds along the coast and hurricane-force winds inland.’’

The University of Georgia’s Marshall Shepherd, a former president of the American Meteorological Society, called it a ‘‘life-altering event,’’ writing on Facebook that he watched the storm’s growth on satellite images with a pit in his stomach.

Sheriff A.J. Smith in Franklin County, near the coast, sent his deputies door to door Tuesday urging people to evacuate, saying they did everything they could to get the word out.

Most waterfront homes stood vacant in Keaton Beach, which forecasters said could get some of the highest water — seas up 9 feet (2.75 meters) above ground level.

‘‘I know it’s going to cover everything around here,’’ said Robert Sadousky, a 77-year-old retired millworker.

He took a last look at the canal behind his home, built on stilts overlooking the Gulf. He pulled two docks from the water, packed his truck and picked some beans from his garden before getting out.

Because of the low-lying land, many people living inland could see their homes flooded, too.

‘‘We don’t know if it’s going to wipe out our house or not,’’ Jason McDonald, of Panama City, said as he and his wife drove north to safety into Alabama with their two children, ages 5 and 7. ‘‘We want to get them out of the way.’’ 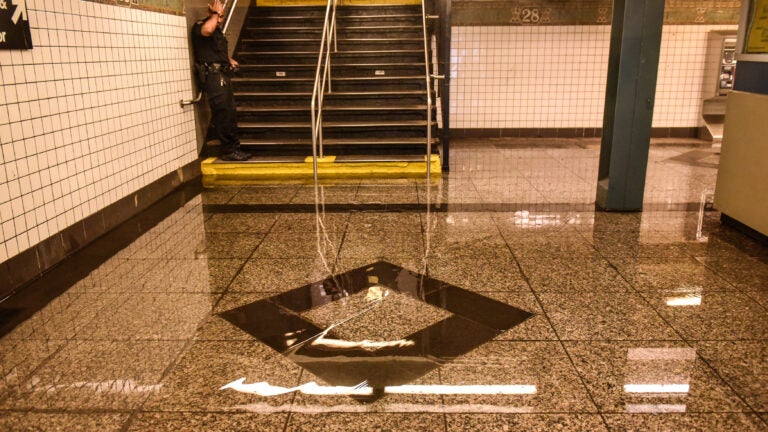