Monday night is likely to have “the best chance for rain” this week, according to meteorologist Mike Wankum of WCVB.

“After that, a few lingering showers Tuesday morning and another round of showers Wednesday morning. Lots of dry hours in between,” he said. Wankum’s forecast shows Thursday to be the clearest day of the week.

The best chance for rain will be Monday afternoon/evening. After that, a few lingering showers Tuesday morning and another round of showers Wednesday morning. Lots of dry hours in between. #wcvb pic.twitter.com/B2ydMRvtZo

By Tuesday, Boston could see rainfall of just over an inch, Vicki Graf said.

The forecast is trending a bit wetter tomorrow with rain arriving earlier and rainfall rates going up along this area of low pressure. I wouldn’t rule out 1″ of rain for a lot of folks tomorrow, some could see more though. pic.twitter.com/TiXWrbXDvX

Graf also predicts the chance for rain from Monday through Wednesday, but that doesn’t mean the entire week is a washout.

“I don’t expect it to be raining all day every day,” she said on Twitter.

Another week, another unsettled pattern ahead. While we do have the chance for rain over the next couple of days, I don’t expect it to be raining all day every day. pic.twitter.com/z2yCBEJqfb

Even with rain in the forecast, temperatures are expected to be “above average” for “most areas this week,” according to WBZ meteorologist Barry Burbank. Temperatures in Boston are expected to stay in the mid- to upper- 60s, his seven-day forecast shows, with Wednesday’s high at an expected 71 degrees.

“Sunshine will be limited through [Monday] then more prevalent Wednesday & especially Thursday,” he said.

My Fresh 7-Day WBZ Weather Forecast: Above Average Temperatures Expected Most Areas This Week. Sunshine Will Be Limited Through Tomorrow Then More Prevalent Wednesday & Especially Thursday. An Onshore Breeze Will Keep It Cooler At The Coast Some Days. #wbz pic.twitter.com/6g9L3xQD6M

“We’ll likely end the week with another wet system moving through, bringing light-to-moderate rain showers [Friday] and into the overnight hours,” the National Weather Service said. 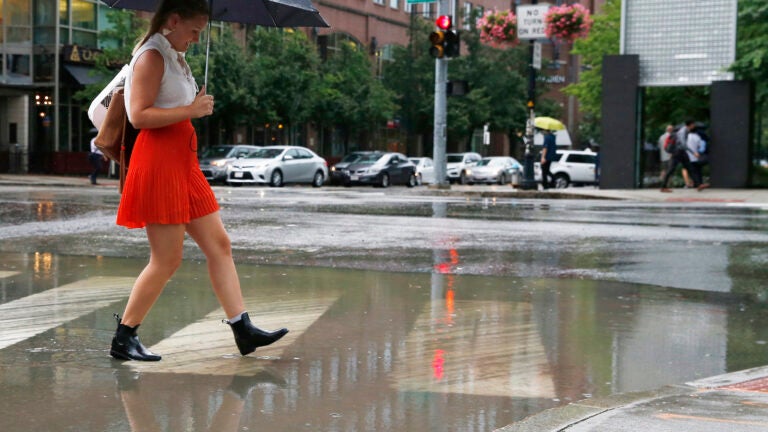 What meteorologists are saying about the end of the heat wave, impending thunderstorms