If your Halloween costume includes an umbrella, you’re in luck.

Meteorologists are warning that rain is in the forecast for Thursday, when trick-or-treaters will be out and about seeking candy.

On the bright side, Bill Simpson, a spokesman for the National Weather Service Boston, said this year’s Halloween will be warmer than normal, with temperatures in the low 60s.

“Within that window between 5 and 8 p.m., the likelihood of it raining is pretty strong,” the forecaster said.

Trick-or-treaters should expect, not heavy downpours, but consistent, persistent, light rain, he said. There’s a chance that the rain timing could change, but Simpson said it’s probable the candy-centric holiday will be a wet one.

Below, what other Boston-area meteorologists are saying about the Halloween forecast:

That summertime humidity is with us for Halloween and into Friday morning before the fall crispness returns during the day. Dew points well into the 60s! pic.twitter.com/q410kYRqca

Showers move in during the day on Thursday. Early look at how much rain will have fallen by 8 p.m. on Halloween. pic.twitter.com/iEbecIOKLm

Record in Boston for highest during November is 68F…might be close pic.twitter.com/TMeYAoqm2n

Do I think there’s a chance of a dry patch for trick-or-treating? Yes, there is hope for that. Timing will hopefully get locked down on Wednesday to plan for it.

May need to waterproof those little ghosts and goblins Thursday evening, but at least it’ll be mild. Temps may even tick up a couple degrees through the evening. Gusty southerly breeze is with us too. pic.twitter.com/FWKCV95dFU

Hold on to your witches hat type of night Thursday. Gusts near 40mph out of the south on Halloween Evening. pic.twitter.com/MczbA6JtPL

Turning warmer with 60°s mid to late week… but it comes with more wet weather. Turn on #wcvb for forecast details pic.twitter.com/F9bowLpfco

Another soaking rain coming Thursday night into Friday morning. Rainfall likely ~1″ with scattered showers around for trick or treat time. Southerly winds could gust to 40mph Thursday evening- then shift to the west Friday clearing us out by afternoon #WCVB pic.twitter.com/Ahz1gfboUA 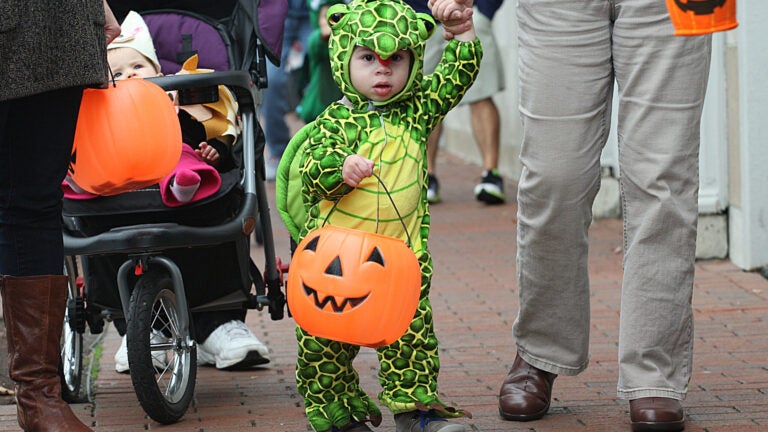 Mass. communities are rescheduling trick-or-treat times due to Halloween storms