Some places south of Boston saw the thermometer reach 60 degrees Tuesday morning, but that warmth is set to move out, and in its place comes what local meteorologists are saying could be record cold on Wednesday.

“Likely breaking the coldest high temps tomorrow for much of Southern New England,” he said.

Likely breaking the coldest high temps tomorrow for much of Southern New England. Including Worcester and Boston. pic.twitter.com/Yubv1agyk5

And the Greater Boston region isn’t the only area that could experience record cold, according to Bill Karins, a meteorologist with NBC News’s Climate and Weather Unit.

“99 daily record lows are expected to be tied or broken tomorrow morning with this unusually cold mid-November arctic blast,” he said.

99 daily record lows are expected to be tied or broken tomorrow morning with this unusually cold mid-November arctic blast. pic.twitter.com/BDDjXF7auj

After a mild morning Tuesday comes a “strong cold front,” according to the National Weather Service. The day also brings “a very brief period of snow,” with potential accumulations from a coating to up to 1 inch in higher elevations. The service predicts it could snow in eastern Massachusetts between 1 and 4 p.m.

[Limited Impact] Rain changes to a very brief period of snow between 9 am and 1 pm across interior MA/CT, 1 to 4 pm in eastern MA/RI, and 4 to 7 pm across Cape/Islands. A coating to up to 1″ of snow in highest terrain. A few slick spots possible, but overall impact looks low. pic.twitter.com/gY1m6vcaQw

Temperatures, meanwhile, will continue their steady decline throughout the day. Boston was predicted to be at 41 degrees at 10 a.m., but is forecast to drop to 35 degrees by 2 p.m. and then 31 by 6 p.m.

[Temp Forecast Today] Southern RI & far SE MA may see temps break 60 this am ahead of a strong cold front. Rain overspreads the region from west to east this morning & early afternoon, ending as a very brief period of snow. Accums a coating to perhaps up to 1″ in high terrain. pic.twitter.com/h7NlBBRCse

“A cold front pushes through the area today… bringing us scattered rain briefly changing to snow,” Sarah Wroblewski, a meteorologist with WBZ, said.

A cold front pushes through the area today… bringing us scattered rain briefly changing to snow. Showing you how quickly temperatures drop on #WBZThisMorning pic.twitter.com/McLyGmlfiy

Wednesday morning’s wind chills in Boston could be just 6 degrees, according to Shiri Spear, a meteorologist with Boston 25 News.

Meteorologist Cindy Fitzgibbon of WCVB said that “it will feel more like January.”

“Here comes the COLD!” she said. “Temps drop this afternoon changing rain to snow before ending… Teens tonight with record cold highs only around freezing tomorrow.”

Here comes the COLD! Temps drop this afternoon changing rain to snow before ending… Teens tonight with record cold highs only around freezing tomorrow. Wind chills in the single digits in the morning- it will feel like January. BRRR! #WCVB pic.twitter.com/nQK7xC4lON

Temperatures Wednesday night in Boston are supposed to dip to 19 degrees, according to the service. Thursday is forecast to be warmer at 42 degrees, and then Friday should be sunny with a high around 50 degrees.

Both Saturday and Sunday are predicted to be sunny or mostly sunny with highs of 34 degrees and 42 degrees, respectively. 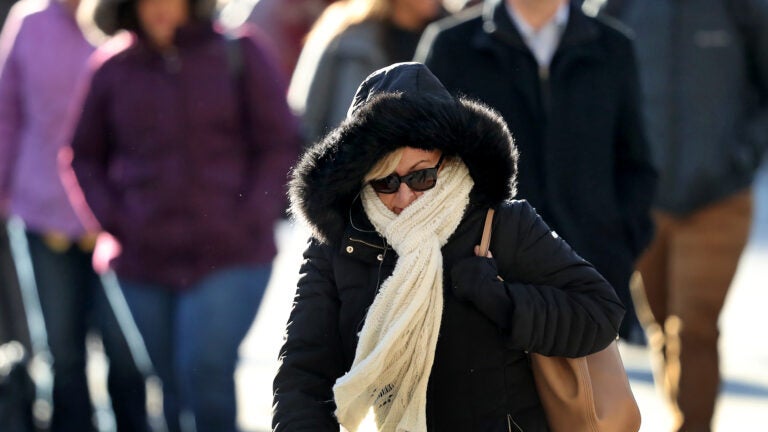 ‘That record is pretty vulnerable’: Potentially record cold — a bit of snow — to roll into Boston this week