This morning the rain was pelting down on the roof and it was 45 degrees. Now it’s snowing and 10 degrees colder. The storm is underway and already 6-10 inches of heavy, wet snow has fallen in parts of Worcester County.

The forecast hinged on the fact that the dynamics or the amount of energy in the storm continues to be high. It was 19 degrees this morning at Mount Washington, just over 6,000 feet high. That cold air above us is relevant to the entire forecast. There’s not really a mass of cold air moving in during the storm and if cold air had been in place already I’d have forecasted 2 feet of snow even in Boston. However, yesterday was around 60 degrees, which is why the reason the storm began as rain.

Why a change to snow?

As this low pressure moves north and east the precipitation will continue to come down very hard and drag that cold air that’s up at the height of Mount Washington’s peak to the surface. Many areas have changed to snow, but even if it’s raining as you read this, it’s snowing above you. In the same way when a big truck goes by you feel a rush of air being dragged by the movement of that truck those trillions of snowflakes are dragging down little bits of cold air towards us. Eventually, the rain-snow line will collapse to the ground from above. This is why the higher elevations see a change to snow first.

Looks like some dry air is getting pulled into the system. This means areas will end at lower end of predicted totals. Might shut off earlier as well. pic.twitter.com/Lrm8akNWDw

Could it stay rainy?

The forecast hinged on this changeover. The odds favored a changeover, but it wasn’t out of the question that the changeover didn’t make it to the coast and most of the storm ended up rain. There’s still going to be wide range of snow totals in a relatively short distance when this ends near midnight.

We have seen some thunder with the snow in the most intense bands and there will be times the snow comes down at 1-3 inches per hour this evening. There are already nearly 25 thousand customers without power as of late afternoon Saturday and the number is growing.

Where are winds forecast to be strongest?

The storm will be east of Cape Cod around 7:00 p.m. this evening. In that position the winds will be coming from the north and negate any warming from the ocean. Because the storm is so intense there will also be some wrap-around banding. The winds will be strongest over Cape Cod and the outer tip of Cape Ann. In this area winds could exceed 50 miles per hour.

How cold will it be after the storm?

Temperatures will stay in the 30s during the day Sunday-Monday and even into Tuesday. At night it will fall down to the 20s, meaning if you do not clear the snow it will just end up as a hard mess. Remember: The sun’s angle is very low this time of year so even if temperatures get above freezing it’s difficult to melt unless we have a rainstorm or temperatures well into the 40s. We should see a moderating trend later next week. 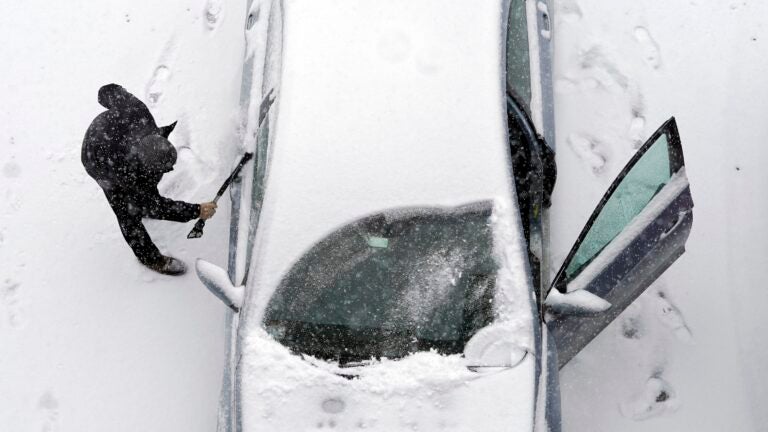