If you’re hoping for all the meteorologists to be wrong on this one those hopes were dashed as the snow piled up overnight. Most of Cape Cod had 3 to 7 inches before the changeover to rain and I’ve measured over 10 inches in MetroWest by 6 a.m.

As I write this temperatures are in the teens north and west of route 495, but in the lower 30s to the east. It’s a perfect snowman or snowball making snow in metro greater Boston, but is light and fluffy in the colder air. Over the next few hours, certainly by noon, temperatures will fall back below freezing in nearly all of Eastern Massachusetts.

Wind chills are in the single numbers and teens, so it’s full-on winter gear this morning. The cold is nothing excessive nor is it record-breaking, but it’s definitely not going anywhere for a while.

If you did get heavy, wet snow, it will tend to refreeze in all areas except Cape Cod, where I don’t think it will go below freezing today. Temperatures will drop 7-10 degrees in under an hour in Boston this morning.

Colder air moves back into greater Boston this morning. 10 degree drop in less than an hour as temps go below freezing before noon. pic.twitter.com/w9L4Y3bGSD

For the rest of us the snow on the ground will become capped by lighter, fluffier snow piling up easier with more air between each individual flake.

I left the 10 to 16 in totals on the map, but I did try to highlight an area in southern New Hampshire that could go over 16 inches. It’s also not out of the question that some areas running from roughly Boston Southwest could go over that number as well in heavier bands. Some of the models have that band right over greater Boston this morning.

Still expecting that wide swath of 10-16″. In the colder air it will pile up faster so 16-24″ amounts possible under heaviest snow bands. pic.twitter.com/qfhClbquFB

When does it end?

Since the snow came in on time, the next thing you probably want to know is, when is this whole thing going to be over?

Most of the snow will be on the ground by 9 to 11 a.m. from Springfield to Boston, but I expect the snow to linger a little longer with a coating to 2 inches more. if you’re one of those people that doesn’t shovel till the absolute final flakes have fallen, I put together a map — please give me a little wiggle room on the timing.

Most of the accumulation is over by 11 am in greater Boston, with a coating to a couple of inches after. These times are for those who don’t like to do anything until final flakes. Give me some wiggle room here, please. pic.twitter.com/Fb6rfxOe0G

As expected the winds have been noticeable but nothing excessive. Any power issues should be scattered, not widespread, nevertheless it’s always a good idea to keep cell phones charged in these situations.

I expect improving conditions overnight and the roads will become much more travel-able. The next couple of days looks quite cold with readings in the 20s and lower 30s and nighttime down in the single digits and teens. We do have a milder forecast as we head into Christmas week, but the snow isn’t going to disappear rapidly.

Snow continues accumulating this morning. It be heavy at times trending lighter after 10-11. Final end time is 11-4 west to east. Cape the last to see flakes stop. pic.twitter.com/3NoJwxNbZr 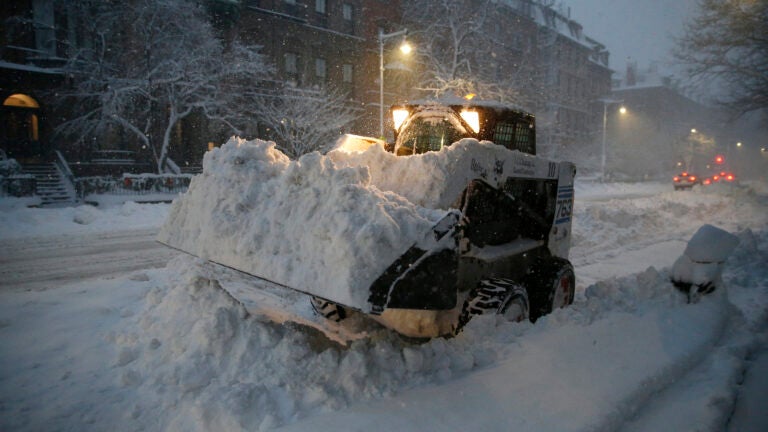