It’s Christmas Eve, and it’s the calm before the overnight storm. Our upcoming weather looks quite nasty, especially after midnight Thursday and through about noon on Christmas.

The big story with the weather is going to be the wind. There’s an enormous temperature contrast between the upper Midwest and New England developing. This difference in temperature creates a big difference in air pressure. The atmosphere doesn’t like this difference and uses wind to try to balance things back out. The greater the pressure difference, the bigger the wind, and we have a lot of it on the way.

All those yellow lines in the map below represent isobars, and the closer they are, the windier it is. 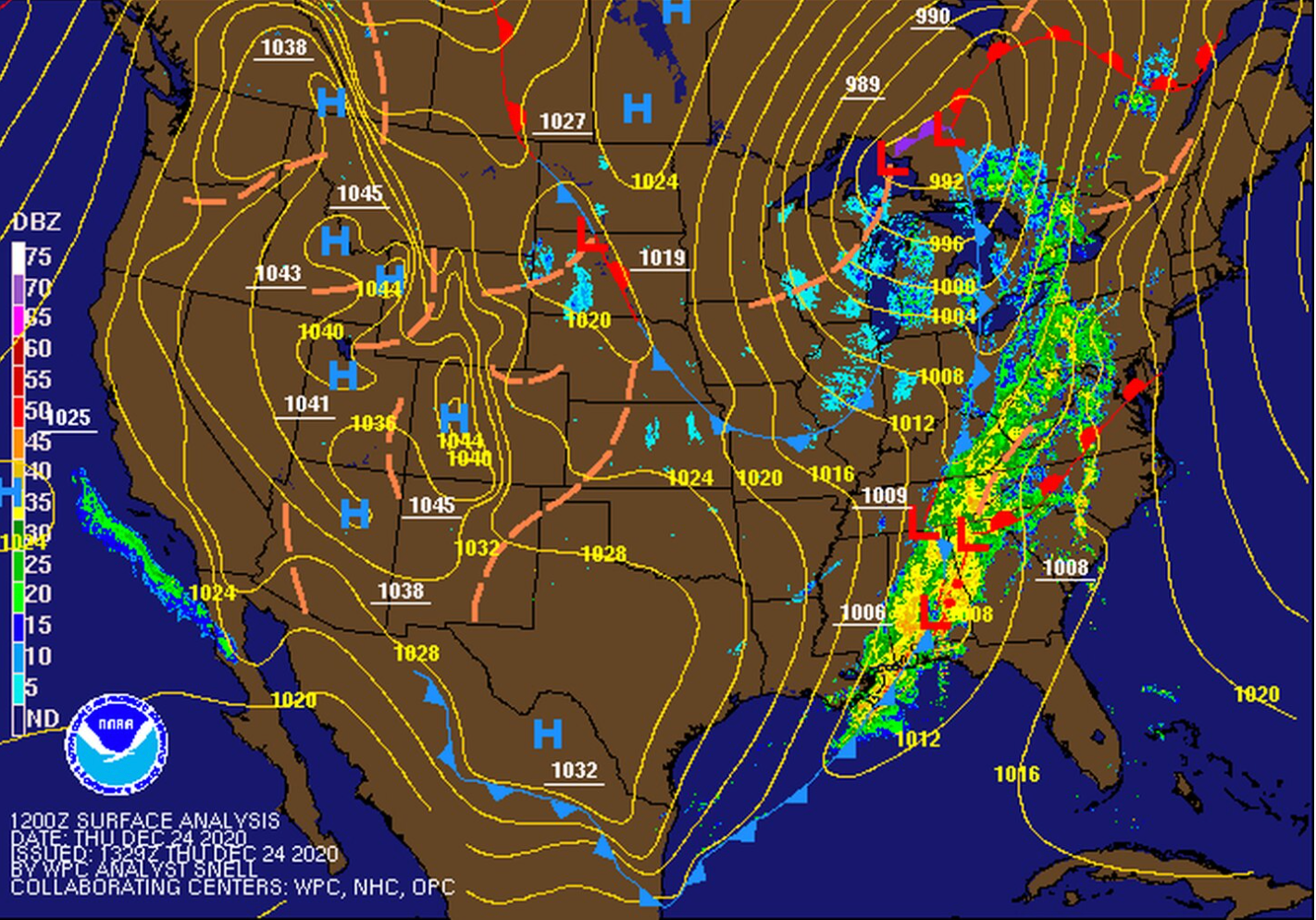 Cold and snowy weather across the upper Midwest is in stark contrast to the mild weather in the East.

Less than a thousand feet above the surface late tonight and tomorrow morning, winds will be gusting over 80 miles per hour. As torrential rain moves through, those raindrops will pull some of that wind to the surface. Obviously, the winds will not be quite that strong at the ground. However places like Blue Hill could actually see gusts approaching those speeds. It’s difficult to know which communities are going to be hit the hardest because wind can be very inconsistent. After the storm is over, there will also be areas that are simply unscathed.

This is the big weather story tomorrow. Plan on losing power in Eastern Massachusetts and if you don’t then nothing lost. pic.twitter.com/w4OtMxCLnW

The wind will be sporadic: At times it will only appear breezy, and then at other times a powerful gust will blow through, potentially taking down branches or whole trees. 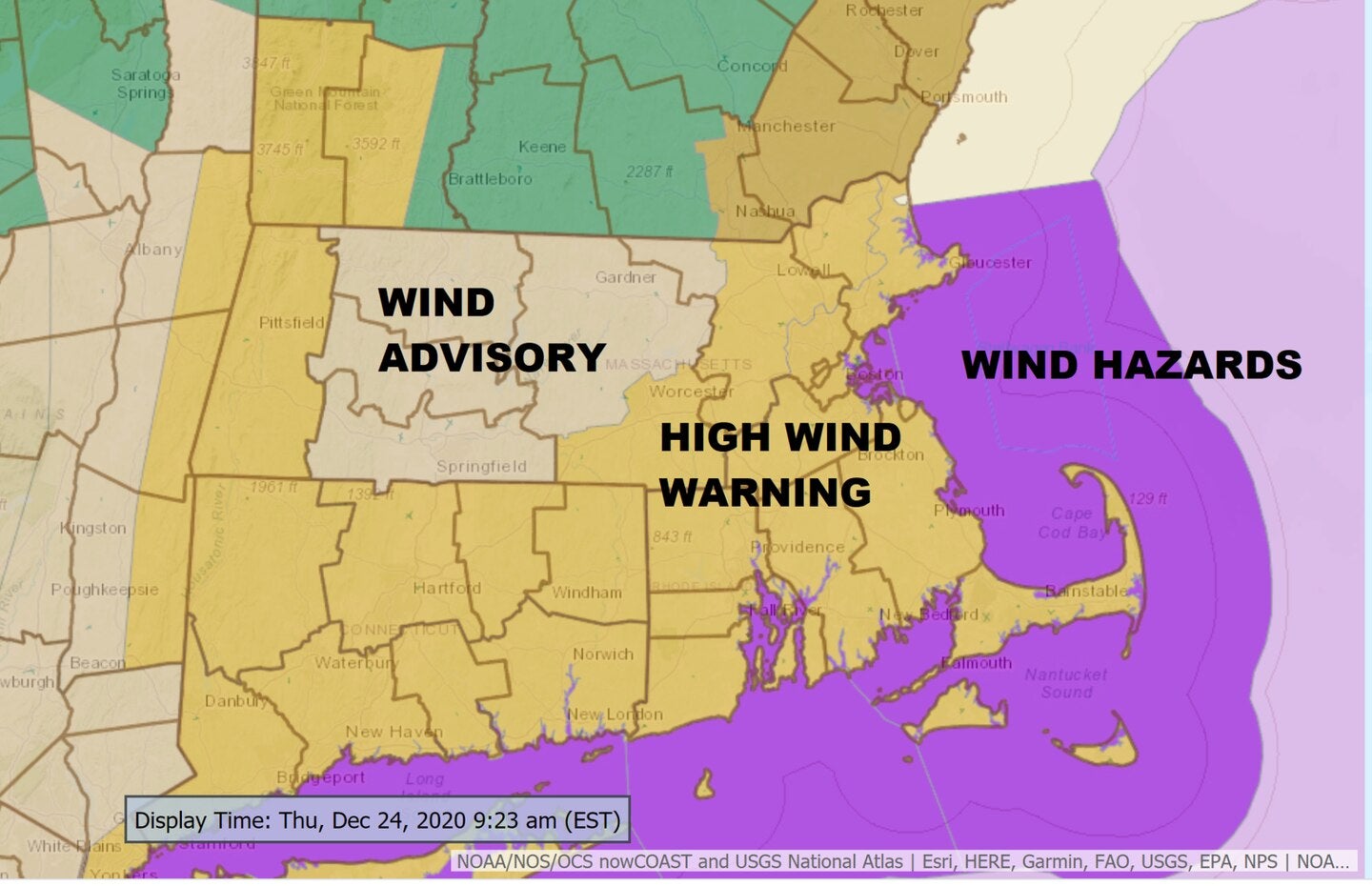 High wind warnings are posted for much of the area.

I would recommend taking down any large, inflatable outdoor ornaments. Also, be sure that your phones and other necessary equipment are charged before you go to bed. If your basement is prone to flooding, I would move any important things off the floor and obviously check sump pumps.

It’s difficult to predict exactly how bad it will be come Christmas morning, but there’s no question we’re going to see thousands of people lose power. It’s just a matter of how many thousands.

Along with the wind will come some heavy rain late tonight and during the morning. You may also hear the rumble of thunder. The rainfall will be powerful enough to flood city streets as well as some basements.

Still looks like one to two inches of rainfall with some places getting three inches. Basement and street flooding the main issues rivers should be okay around here. pic.twitter.com/7fgxeitaIC

Temperatures will continue to rise throughout Christmas Eve and into Christmas morning, approaching 60 degrees. It’s unlikely we reach record high temperatures, but we will definitely be in the ballpark.

The winds won’t last all day, and by noon you’ll already start to see them slackening. This is good news for power crews who will need to get out and restore electricity to many of us.

It will turn cold on Saturday, but sunshine will abound and will continue into Sunday. Afternoon temperatures will be in the 30s, just where they should be this time of the year.