Some roads may be coated in snow and become slippery by the end of the evening as weather officials predict the possibility of a winter storm Sunday night into Monday morning.

The National Weather Service tweeted Sunday that with temperatures hovering around freezing, and only a light, intermittent snowfall, officials are expecting snow to accumulate on unpaved surfaces. Yet the weather service also noted that as temperatures fall back to the 20s overnight, wet roads may lead to black ice during Monday morning’s commute.

Officials added that rain is mostly expected southeast of I-95, with the possibility of a brief period of wet snow before Monday morning. Snow is also expected northwest of I-95, where total accumulations will average between two and three inches before coming to an end by early-mid Monday morning.

NWS reported that the Worcester Hills and Berkshires, where temperatures are a few degrees colder, may see more snow accumulation than other areas.

Snow may also spread across western Mass. and northern Connecticut before moving over the I-95 corridor Sunday night, making travel between the states slushy and difficult, the service added.

Light snow continues to fall across most areas near and NW of I-95. An additional 2-3″ of snow is expected thru early Monday AM, with freezing rain accretion amounting to a light glaze. pic.twitter.com/0vnjnH5r29

The winter storm arrived around sunset on Sunday and will continue steadily overnight, likely lingering through Monday morning.

A bigger storm may be on the horizon for next week, weather officials hinted, but until then, they reassured residents that the overnight forecast wouldn’t lead to much other than slick roads.

Here’s what local meteorologists are saying about the incoming mix of wintry weather:

It’s a perfect snow for walking. Not too, heavy not too wet. #moodsnow pic.twitter.com/dM4PY5nIKk

Some snow and rain on the radars. All this is moving northeast. pic.twitter.com/4O72pAaeet

Vicki Graf, Boston 25: ‘This is not a major storm by any means, but there will still be some slippery spots on untreated surfaces overnight’

Latest snow update doesn’t show much through Monday. This is not a major storm by any means, but there will still be some slippery spots on untreated surfaces overnight. pic.twitter.com/awdQj9fB7A

Mike Wankum, WCVB-TV: ‘This will not be big snow event overnight. Expect around 1″ in the city. More to the west’

Most of the accumulating snow tonight will be on grassy surfaces but roads are wet and later tonight we could see black ice form. Take it slow and watch for slick spots. #wcvb pic.twitter.com/QN2GmeYSFe

Light snow, rain and mix continue to fall. It should continue to fall at this rate thru 3am. A bigger concern may be slick spots that develop as temperatures drop a couple of degrees overnight. #wcvb pic.twitter.com/Ix4zm1bjDi

As the sun sets over Boston a light snow continues to fall. This will not be big snow event overnight. Expect around 1″ in the city. More to the west. #wcvb pic.twitter.com/Nuhnc0Kynb

A batch of steady snow in Worcester county and near and along the Pike to the city. Scattered rain showers over SE MA. #WBZ pic.twitter.com/FHWXl7LKl2

Snow/Rain will overspread the area tonight, exit early tomorrow… highest totals will coincide with higher terrain & where temps stay near/below freezing. NOT a big event, but there will be some slippery spots on untreated surfaces. #WBZ pic.twitter.com/K6rrpbqFQt 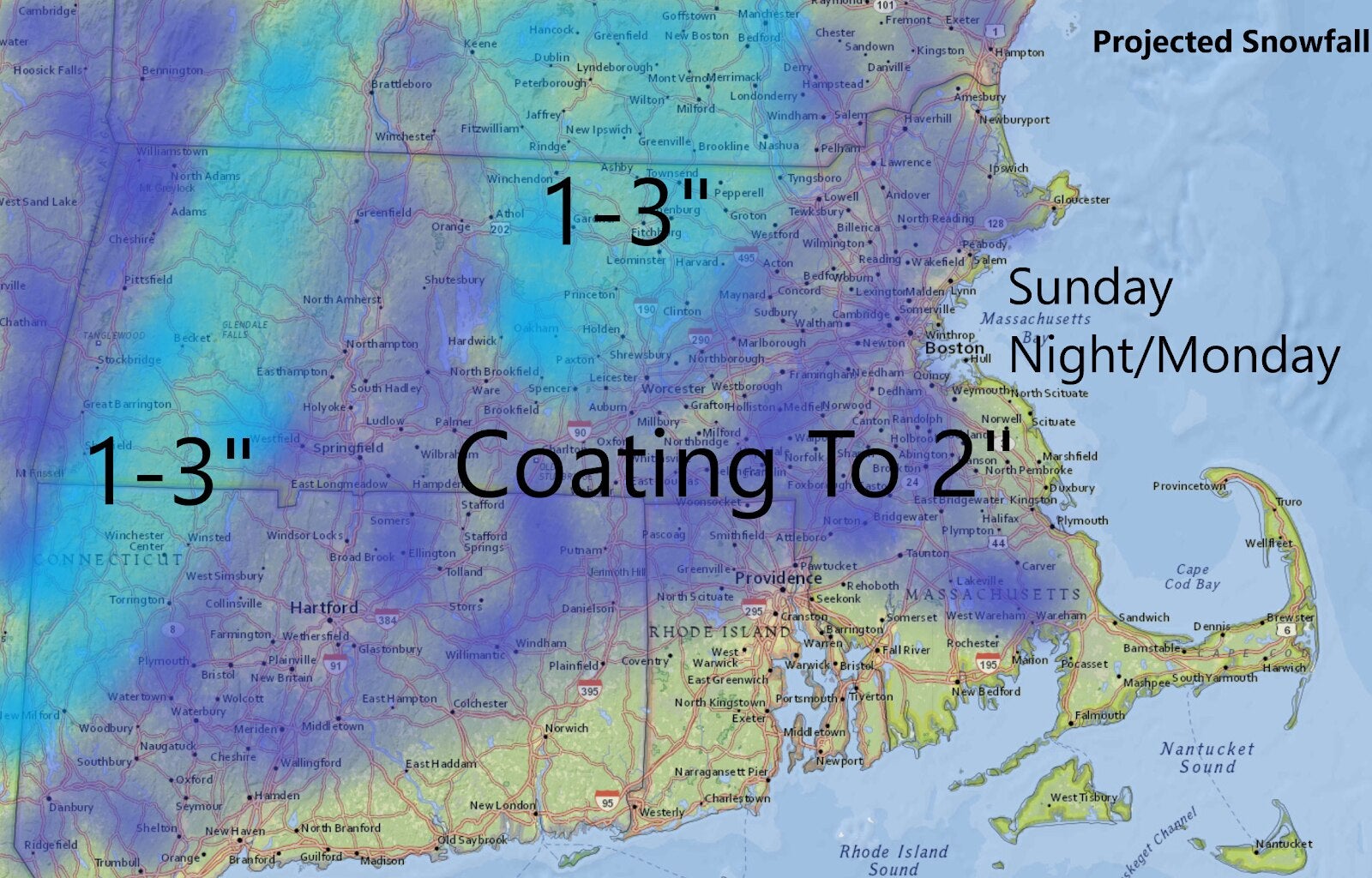 Will Sunday’s storm bring much snow?