It’s perhaps a contest few would want to win, but the Massachusetts community that received the most snow from this week’s nor’easter is none other than Lowell.

The Mill City received 24 inches, or exactly 2 feet, of snow from the storm, which brought wind gusts between 60 and 70 miles per hour in some areas and widespread power outages.

Just in case you missed these 20″+ snow reports from yesterday – Lowell for the win! @boston25 #mawx pic.twitter.com/pDfFBIAAcu

Though some communities were walloped, others received little to no snow during the storm and instead had rain.

The differences in snowfall have to do with the coastal front, a common occurrence in nor’easters, according to meteorologist David Epstein.

“The Monday storm featured a coastal front that snaked its way from Cape Cod to Boston and then onshore over Cape Ann,” he said. “On the right side of the front, marine air brought temperatures into the 30s, while to the left readings were in the 20s. The contrast between the cool and the warm air brings an additional lift to the atmosphere enhancing snowfall on the colder side.

“When the coastal front stays stuck in one place, even dividing a town, you can have large discrepancies of snow in a couple of miles,” according to Epstein.

The differences in the type of snow that fell in certain areas also had to do with the coastal front, according to Epstein. Areas that had milder air received the heavy, wet snow, while towns further inland with cold air had the lighter-feeling snow. 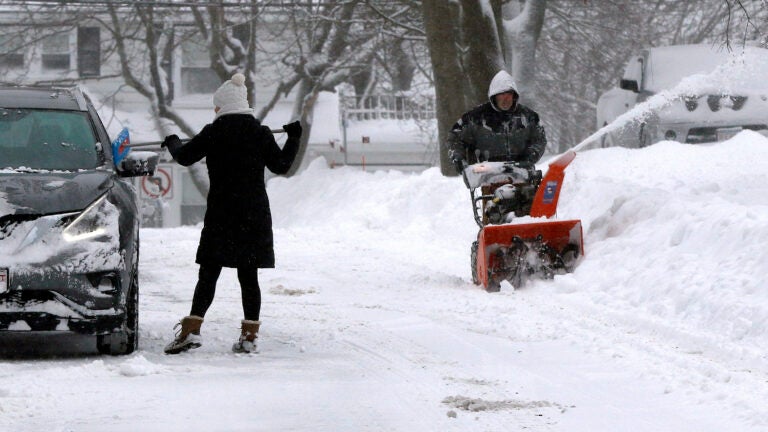 Thousands still without power as cleanup from nor’easter begins