With more snow on the way today, you and your shovel are most likely lamenting that you’re not getting much rest.

Today’s weather system is coming out of the Ohio Valley and moving quickly toward the Northeast. As I write this early Tuesday morning, some snow has already broken out to the north. Snow showers will continue to become more numerous this morning before steady snow arrives this afternoon.

All of us are going to see accumulating snow with the possible exception of portions of Cape Cod, where it might be too warm to see anything more than a coating to an inch. Rain showers are the dominant player on the islands.

More snow folks. For many this is a lighter texture snow and will pile up easily. Colder air makes for more snow in higher liquid to snow ratio. I Will not be surprised to see a few spots go over 6″, but that will be the exception, not a rule. pic.twitter.com/YygRmp455B

Most of the snow will accumulate between roughly noon and 5 p.m. There is some indication that once again we’re going to see a few heavy bands of snow this afternoon. The signal from the guidance I use is not nearly as strong on today’s bands as it was Sunday. This means if they do occur, they won’t last as long or be as powerful.

Today’s storm has prompted a winter storm warning to be issued north of Boston because the odds of those areas reaching 6 inches of snow are the greatest. Still, not everyone will see that much snow. There’s not a lot of moisture with this particular system, but because temperatures are going to be so cold, it’ll pile up easier with snow ratios at perhaps 1:15. This means that a third of an inch of moisture could yield nearly 5 inches of snow.

When all is said and done, I think the majority of southern New England will be in the 2 to 5 inch range, but some areas will receive 6 inches or even a little more. Those higher totals will be the exception, not the rule.

An elongated band of snow reaches north this morning from the main area. So while some areas north will see snow before noon, most of the accumulation occurs 12p-6pm. Ending either side of 7P-8P. pic.twitter.com/MdxmkFhYca

This is a very fast-moving event and will be over this evening, probably by 7 p.m. around Boston and actually a little earlier to the west. We will see quick clearing by morning with temperatures back down into the teens.

Wednesday will be a sunny and chilly day.

The next weather system that threatens the area is later Thursday and Friday. Right now, this seems more like a threat than a hit. We are, however, precariously close to the track of this weather system, so don’t be surprised if I have to reintroduce snow to the forecast at the end of the work week.

Saturday will be another quiet day before the next weather system approaches on Sunday, and that one looks more likely to bring snow or perhaps even a mixed bag of precipitation to the area. The pattern will continue to be active again next week with yet another chance of snow or rain. 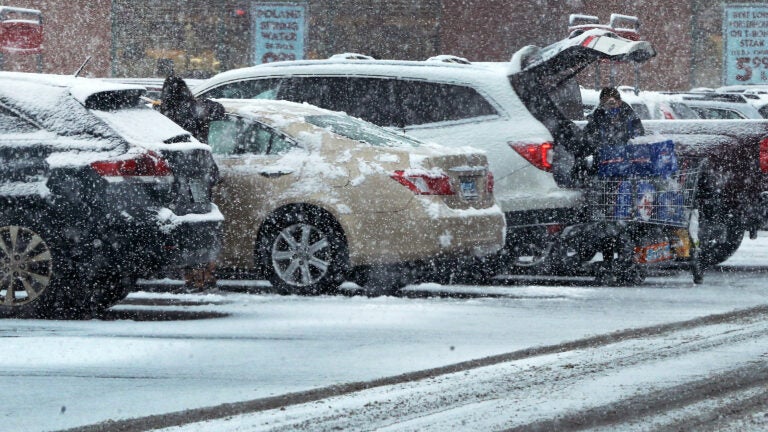