By February standards, Thursday was actually pretty nice, a little chillier than average, but with sunshine and light winds, it wasn’t too bad.

Earlier this week it looked as though a storm system might affect us for Friday, but for the past several days it’s appeared that this would not be the case and that a drier forecast would materialize. Although we are going to miss this particular weather system it doesn’t mean that we don’t have plenty of active weather on the way — things are going to remain active well into next week.

When I write about the possibility of snow or rain it is just that — a possibility. Including Sunday, there are perhaps three more storms on the horizon in the coming week. It’s tough to say which of them may prove to be most significant, but the way it appears right now next Tuesday’s event has the greatest potential. The one after that could be a warmer and messier storm with rain involved.

After a cold Thursday night, Friday will continue to be chilly. Temperatures will reach into the 20s, perhaps nearing 30 across the South Coast in the afternoon. There will be an abundance of sunshine.

On the edge of the really cold stuff Friday morning. Nevertheless bundle up for the early dog walk. pic.twitter.com/z1yNBDZntf

Saturday is also a pretty nice day although there will be some clouds rolling in in the afternoon, forerunners of a coastal storm that will not have a big impact.

There’s quite a few deliveries that will be happening for Valentine’s Day and the good news is that the snow will not pile up. I do expect precipitation to break out Saturday after midnight and continue into the first half of Sunday. My early thinking is that we’ll see one or two inches of snow for many of us with a coating to an inch south of Boston.  There will be rain mixing in at times in that area.

Doesn’t look like more than an1 to 3″ for Sunday and Saturday is dry. This map shows the amount of moisture, not snow. This is good for florists and other #ValentinesDay deliveries. Weather won’t be a major issue. pic.twitter.com/574FS5knKr

Monday, which is also President’s Day, will bring a blend of clouds and sunshine and temperatures right around the freezing mark. Another storm system approaches late Monday night, but is really a Tuesday system with snow likely. Obviously, it’s way too early to talk about timing or amounts. This storm has the potential to affect both the Tuesday morning and evening commutes.

The total amount of precipitation with this storm looks to be more, so the potential is for heavier snow but obviously, this far out a lot can change. 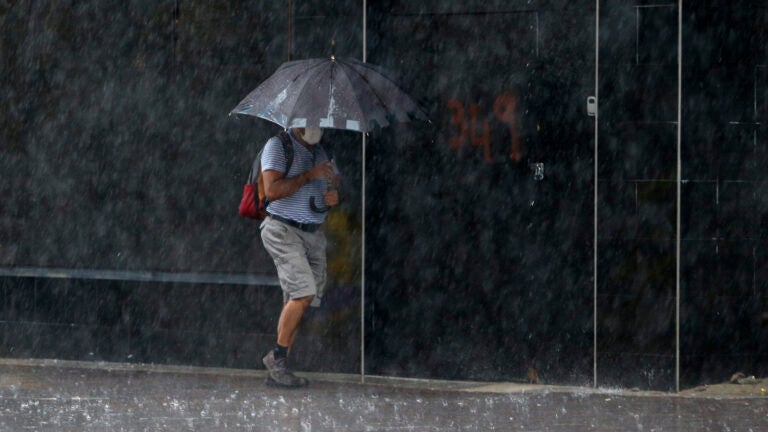