It took a while, but when winter decided to kick into full gear across the heartland of the nation these past few days, it did so with a passion.

Almost the entire Southern Plains was under winter storm warnings on Valentine’s Day, the alerts encompassing some 90 million people. Only nine states within the Lower 48 were not under some sort of winter alert Sunday, with wild winter conditions spanning the continent.

In addition to heavy snow and ice, wicked wind chills covered the nation’s midsection. Even such places as Seattle and Portland, Ore., didn’t escape unscathed; Arctic air spilled through mountains gaps in the northern Rockies, sneaking its way to the Pacific Coast while producing damaging snow and ice.

So what’s behind the onslaught of bone-chilling temperatures and the barrage of storms? It has to do with a number of overlapping factors that came together in the wrong place at the wrong time.

Generally speaking, most weather catastrophes share similar DNA. They all are made up of smaller meteorological ingredients. Individually, any one of these features alone may not be problematic, but added together, it’s the perfect recipe for a high-impact disaster. As the adage goes, the sum is greater than the parts.

Looking back, it’s clear this extreme weather pattern had been incubating for a while. It began in early January with a perturbation of the polar vortex. That disruption knocked the whirling eddy of bitter cold air and low pressure off-kilter, resulting in upper-atmospheric warming that displaced cold air to the mid-latitudes. A look at the upper-air pattern between Feb. 11 and Feb. 16. Note the high pressure (red) across the Polar Region, which allowed the Jet Stream to dip far south across the United States.

According to Judah Cohen, director of seasonal forecasting at Atmospheric and Environmental Research (AER), that sudden stratospheric warming was integral in helping us get to where we are now.

“We had sudden stratospheric warming for much of January with high pressure and a warm Arctic in the polar stratosphere,” wrote Cohen. “This in turn favored high latitude blocking, in particular across the North American Arctic.”

High latitude blocking, or the establishment of stagnant high pressure in northern regions, is one of the main features that drives cold air down into the Lower 48. 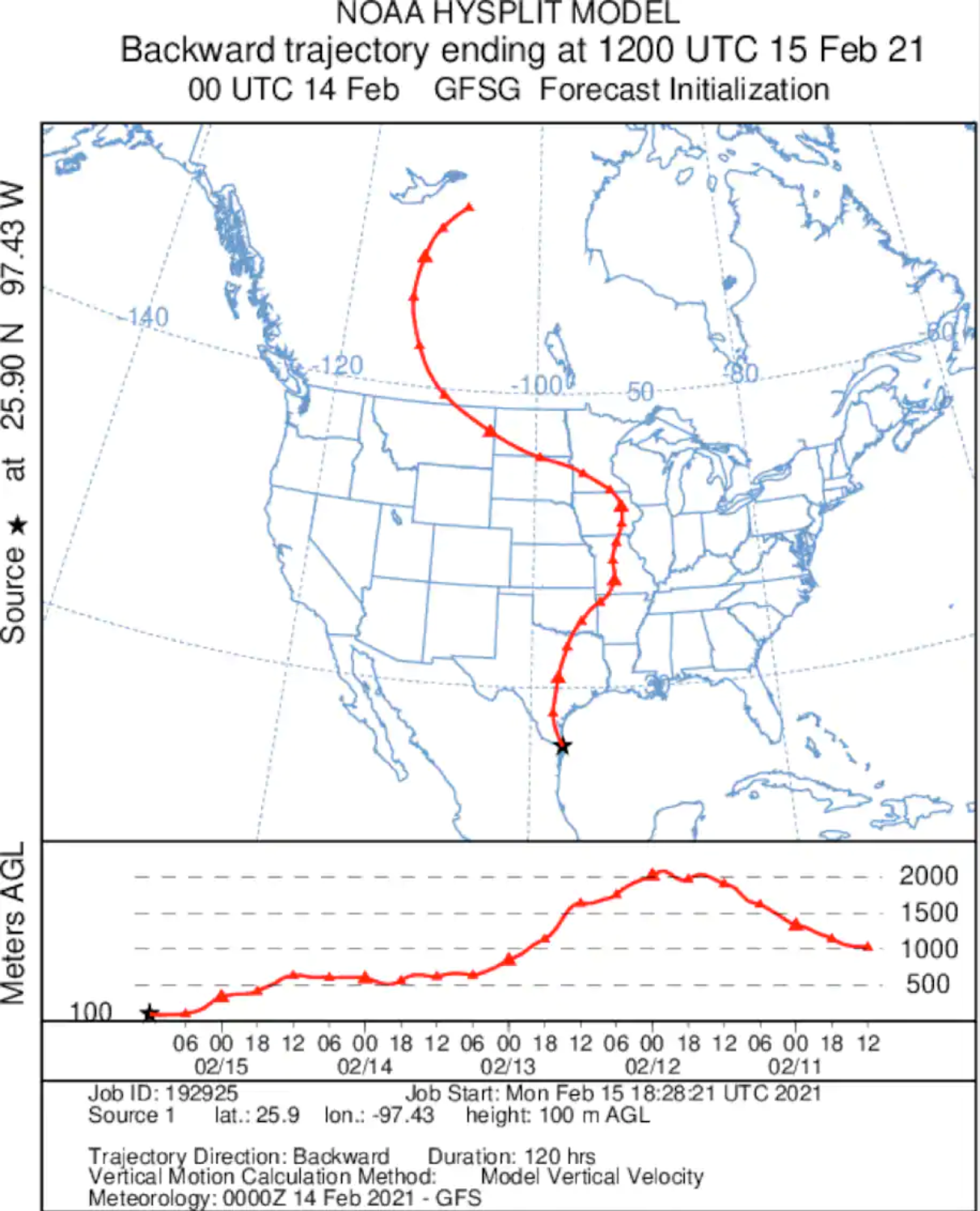 The five-day path (back-trajectory) an air parcel took at 100 meters above ground to get to Brownsville, Tex., on the morning of Feb. 15.

“I think what made this week’s event extreme is that the polar vortex at the end of January/early February was displaced into the northern North Atlantic by a ridge of high pressure near Alaska,” he continued. “The pressure difference between the two created cross-polar flow from Siberia to Canada.”

Once the Arctic high set up across North America, it parked right over the United States, setting up a trajectory for that frigid air to work all the way down to the Gulf Coast.

The Arctic Oscillation (AO) is an index defined by the surface atmospheric pressure patterns at high latitudes up near the north pole. When the AO index is positive, the mid-latitude jet stream is stronger, keeping the really cold air locked up in far northern regions. When the AO index is negative, it reflects a weaker jet stream that develops wiggles and dips, allowing the frigid air near the pole to ooze into mid-latitudes. Where exactly those jet stream dips set up across the Northern Hemisphere dictates who will see the coldest weather. 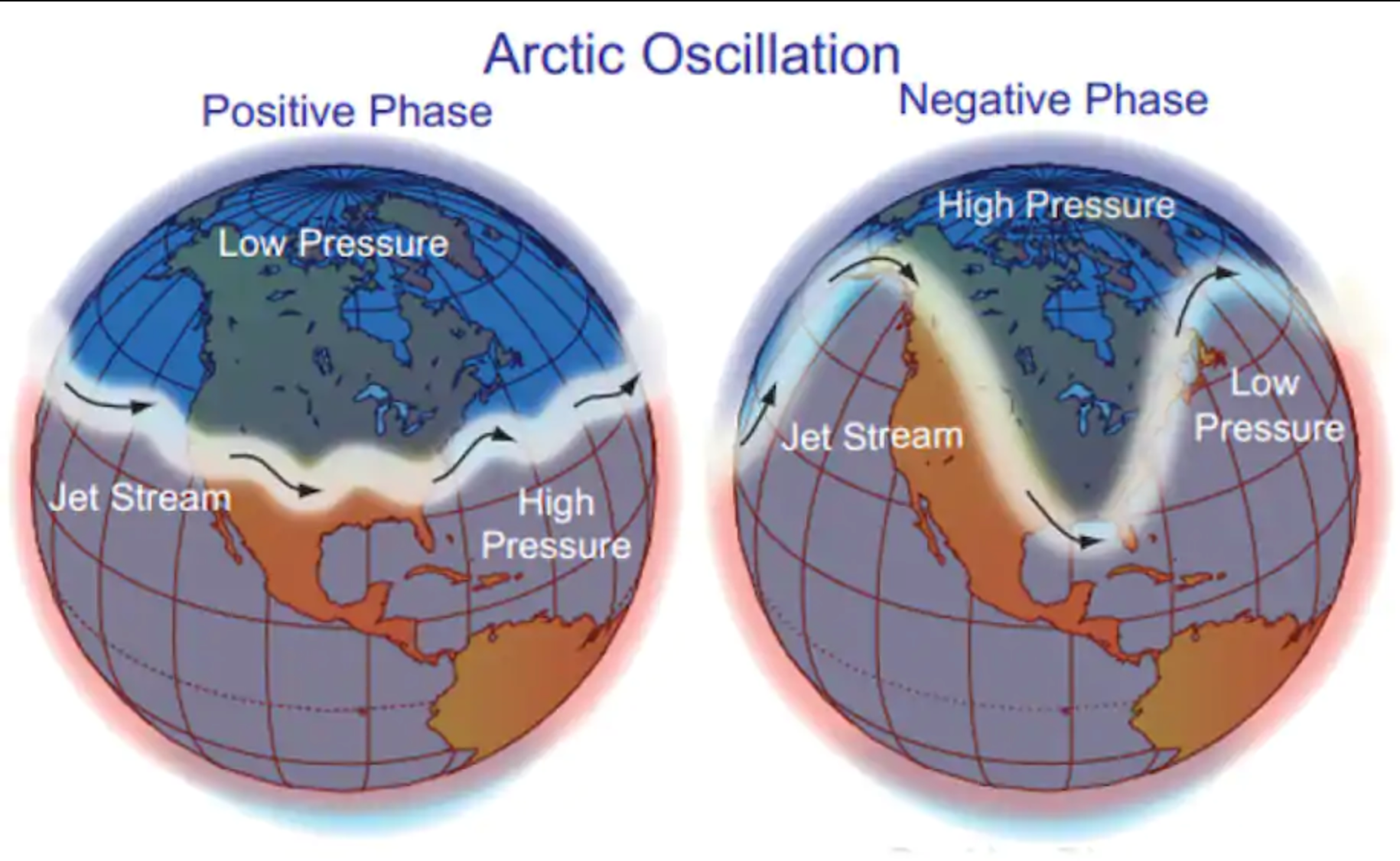 A schematic of the Arctic Oscillation.

Over the course of the winter, the AO remained negative. Over the past week, the index reached its greatest negative value for the entire winter – accounting for the southward dive of the jet stream and outbreak of cold air battering the Lower 48.

Over the course of the winter, the AO treaded in the negative portion of the index. Over the past week, that index reached its greatest negative value for the entire winter.

Added together, it was the Arctic high pressure that provided the cold air, and an errant jet stream that channeled that cold air into place over the nation’s heartland.

There is some evidence that rapid climate change in the Arctic, which is melting sea ice, is helping to disrupt larger-scale weather patterns in the Northern Hemisphere, which may make incursions of polar air more likely and lead to extreme heat waves during the summer. This is still an area of active scientific research, however.

In this instance, all the ingredients came together for a “perfect storm” from the point of view of maximizing severe winter weather impacts over the Lower 48 states. And the impacts are far from over.

Maybe the groundhog knew what he was talking about after all.

Tom Niziol recently retired as winter weather expert at the Weather Channel after a 32-year career at the National Weather Service office in Buffalo.

The Washington Post’s Matthew Cappucci and Andrew Freedman contributed to this report. 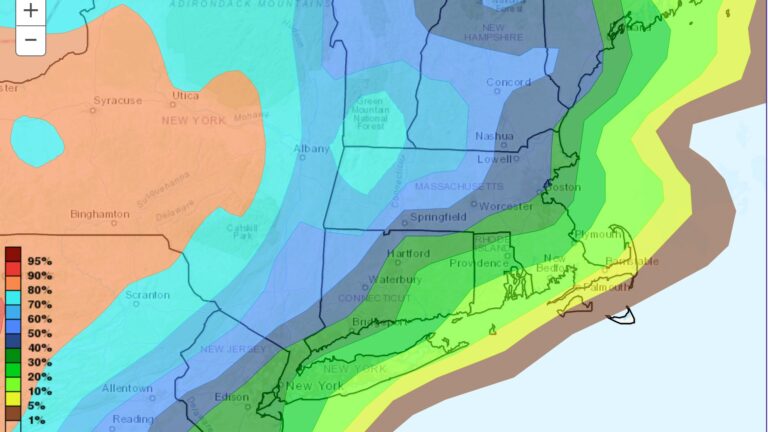 Updated: What meteorologists are saying about the snowstorm later this week